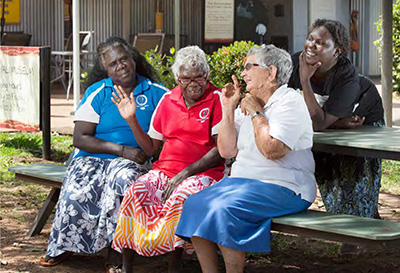 It’s a rare thing to dedicate an entire life to a singular cause, but Sister Anne Gardiner has done exactly that – to the people of Bathurst Island.

Well before mainstream Australia acknowledged Sister Anne Gardiner as the 2017 Senior Australian of the Year, the Tiwi Aboriginal people of Bathurst Island had bestowed upon her the august title of “Puwanikimawu: a person who provides light to the people”.

Sister Anne’s good deeds among the Tiwi have been steady and unswerving for more than 63 years. The diminutive 86-year-old is typical of the group of remarkable women from the Daughters of Our Lady of the Sacred Heart who have worked tirelessly at Bathurst island, 70km north of Darwin, for over a century.

Tiwi pukamani (burial) poles painted with clan designs sit alongside Christian symbols, and Catholic and Tiwi creation stories interweave at the school where Sister Anne has taught since 1953. St Therese’s Church, built by Tiwi labour from local timber, and decorated with images from Tiwi mythology and the Bible, is one of Australia’s most distinctive places of worship with a unique history – the beach it faces was strafed by Japanese aircraft as they flew to bomb Darwin and destroy allied ships, on February 19, 1942. Father John McGrath, the Catholic priest in charge radioed authorities in Darwin that the Japanese were on their way but, sadly, many people did not believe him and more than 100 were killed.

When 22-year-old Sister Anne arrived at Bathurst Island as a novice teacher, Murrupurtiyanuwu school was housed underneath the church, with a dirt floor, long wooden desks, slate pencils and slates to work on. School hours were from 8am until noon, followed by lunch and then most students and teachers would go hunting, fishing or work in the gardens to help feed the community. Others would do ‘fancy work’ (embroidery) or practice guitar.

“We were like any welfare school for many years,” she says. “But I would say the 1970s and 1980s were the highlight of good education on the Tiwi Islands because that was when bilingual education commenced and young Tiwi people went off to be trained as teachers.”

The Tiwi started to absorb Catholicism into their culture from 1911 when Father Xavier Gsell landed on the beach to live among them. Father Gsell, who went on to become the Catholic Bishop of Darwin, took time to learn the Tiwi language and worked alongside the men and women to establish gardens, a school, store and church. Bathurst Island developed a global reputation as a vibrant community where rich Indigenous culture was largely preserved, not destroyed, by European contact.

The mission on Bathurst Island became one of the most successful in Australia, however there was one Tiwi custom that Father Gsell did set about changing: the marriage of young girls to much older men. His solution to polygamy was to ‘buy’ the girls from their parents, send them to school and ensure they partnered with young men who believed in the Christian concept of marriage. His efforts earned him the nickname of “the bishop with 150 wives”. 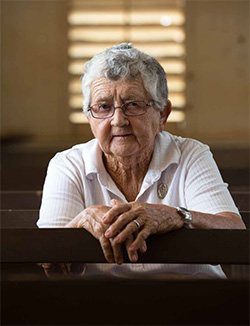 Anne Gardiner was born to a farming family at Gundagai, NSW, and spent her secondary school years at St Joseph’s Ladies College in Albury. “They couldn’t make a lady out of me but they tried,” she says with a laugh. “I was always in trouble; if there was a rule I knew how to break it. I guess I was a little bit of a rebel.”

A chance meeting with two nuns from the Daughters of Our Lady of the Sacred Heart changed her life. “We were all on the basketball court when these two sisters came through on their way down the [Murray] river to visit their relations. They gave us a [photographic] card of sisters in a canoe with a Tiwi woman paddling,” she says. “I was doing my Intermediate Certificate at the time and it meant nothing to me and put the card in my locker at school.

“When I left I took it with me. I had a job at a big store in Coolac that served the farming community for 18 months, and I would look at this picture and think here was another life I could lead. I wanted to help people, so I wrote a letter to the sister-in-charge of the convent at Bowral and was accepted into the Daughters of Our Lady of the Sacred Heart. That little card gave me my vocation and it inspired me to make a commitment to God.”

Before she left for her posting at Bathurst Island, Sister Anne travelled to the Sacred Heart monastery in Kensington, Sydney, where she sought the counsel of Bishop Gsell, who was retired by then. “He was an old man and I was an uncertain young woman. I asked what should I do?” she says. “There was silence for about three minutes and he stared into my soul with piercing blues eyes and said simply: ‘love them’. That has been my motto, and that is what I have tried to do since I arrived.”

Sister Anne admits it took more than five years before she and the Tiwi understood each other, and she commends them for being so patient with her. “I kept on making mistakes,” she says. “I thought I was there to educate them in my way because that was the mood of the time. But gradually I realised something was wrong with my way. I guess I was privileged because I slept in the dormitory with the girls for many years and in those early days we used to sit around a campfire at night before bedtime and I learned their songs, their dances and I became one of them.”

Eventually Sister Anne became principal of Murrupurtiyanuwu school and went on to teach hundreds of Tiwi children. She is proud that, after Indigenous people won self-determination in 1969, the Tiwi invited the Catholic Church and the sisters to remain on Bathurst Island while missions in other communities in Arnhem Land were asked to leave.

“Continuity is the name of the game in any remote area,” she says. “Not that I am doing much now, but I am the one thing they can all refer to. They know I knew their fathers and mothers, and their grandmothers and grandfathers. That relationship bond means a lot, but there will be a time when they come to me and I won’t be here. That is why I have tried to give them as much of their past as I could.” 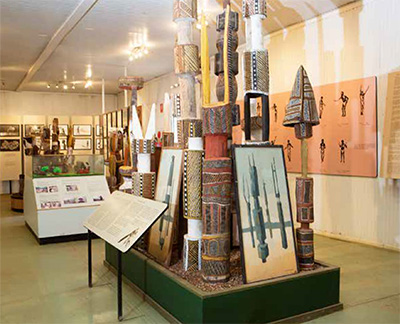 Sister Anne began work on the Patakijiyali (Tiwi for Father Gsell) museum in the 1980s, turning it into one of the most outstanding socio-ethnic institutions in Australia. Initially established in the old mission kitchen, the museum has grown to showcase Tiwi culture, highlighting Indigenous history, including clan structure, mythology and art. There is a section dedicated to the mission period with photographs and a long list of names of Catholic sisters, priests and brothers who served and worked on Bathurst Island. The popular Hall of Fame is reserved for Tiwi athletes, particularly those who have excelled at AFL, including Tiwi-born stars David Kantilla, Maurice Rioli and Michael Long.

“One of the hardest things was the continual letterwriting and fund-raising. I even went as far as taking a couple of buckets and going around the gambling rings [a popular form of entertainment on Bathurst Island] to collect money. I can honestly say we don’t owe a penny,” she says with pride.

One of the last donations to the museum before Sister Anne handed it over to the Tiwi people was the $10,000 she received from the Commonwealth Bank for being Senior Australian of the Year.

Fiona Kerinaiua, who was taught by Sister Anne as a youngster, now manages the museum. She said Sister Anne played a significant role in contemporary Tiwi society, not only as a teacher but also by providing employment opportunities for Tiwi girls and women. “There are four of us who work at the museum,” she says. “Many visitors and tourists come to look inside to understand our culture. This generates income that helps pay for our jobs. Sister Anne has always helped Tiwi women find work.”

According to Sister Philippa Murphy, Sister Anne is an inspiration to many in the order, especially to the younger members of the province. “In her we see a woman who is fully alive; who has lived life to the full,” she says. “Anne is a very compassionate woman who will always stand up and speak up for the voiceless.

“Anne has a great sense of humour and whenever a group of sisters is gathered we can be sure of a good laugh and lots of fun when Anne is with us. We are very proud of her.”

Sister Anne has never regarded the Senior Australian Award as being for herself. “I accepted the award on behalf of the sisters [of the order], who have worked with Indigenous people over the past 100 years, and I also accepted it on behalf of the Tiwi people, who have allowed me to stay and work with them,” she says. “I like to think the award has alerted the wider community to religious women and has opened the gateway to the Tiwi Islands a little further.”

Just as the Tiwi people absorbed many aspects of the Catholic Church into their lives so has the church absorbed Tiwi principles. Sister Anne explains to schoolchildren there are two trees in life: a cultural (Tiwi) tree and a Catholic tree. The roots are entwined to embody Tiwi beliefs of personal relationships, love of country and ceremony and Catholic beliefs of baptism, the Scriptures and forgiveness.

As the last remaining daughter of the Order of Our Lady of the Sacred Heart on Bathurst Island, Sister Anne Gardiner finds solace in memories of good deeds and good people. “I often go to the dedication room [at the museum] and meditate,” she says. “I feel I am in the company of courageous women, most of whom have gone to God. I know what it was like in those early days and I admire their tenacity and spirit. They and the priests and brothers had such commitment.

“It humbles me and I feel guilty that I got this award because I know what they did.”