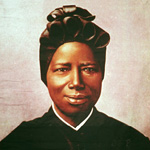 Australia's bishops and religious have joined the global call of Pope Francis to mark Feb. 8, the Feast of St. Josephine Bakhita, as the world day of prayer, reflection, and action against human trafficking. St. Josephine Bakhita was kidnapped and sold into slavery, and later became a Canossian nun and was the first person from Sudan to be canonized, by St. John Paul II in 2000.

Human Trafficking is a crime against humanity.  We must unite our efforts to free victims and stop this crime that’s become even more aggressive, that threatens not just individuals, but the foundational values of society, international security and laws, the economy, families and communities.
—Pope Francis