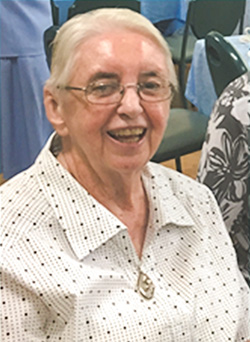 “Let not your hearts be troubled. Believe in God; believe also in me.”

These words from the Gospel of John were chosen by Terie for her Funeral Mass a few weeks ago. They speak of Terie’s absolute trust and deep faith in God. On 21st June, just five weeks after Terie had been diagnosed with terminal Cancer she came face to face with the God she had so lovingly and faithfully served as a Daughter of Our Lady of the Sacred Heart for over six decades.

To Terie’s sister Brenda, her brother-in-law David, and her relatives, and all Terie’s friends, who loved her so much and are deeply saddened by her death, we offer our deep sympathy and love. You know well her deep love for you, her pride and joy in you, and her gratitude to you.  We also offer sympathy to those who join us via live streaming from around Australia, Papua New Guinea and the world, especially our Sisters.

Therese Ann McNamara, or Terie, or even Terie Mac, as she was known by many, was born in Sydney, NSW, on 9th October 1938 to Patrick and Eileen McNamara, the fourth of five children. Patrick had come to Australia from Ireland when he was 24 years old.  Terie came from a loving, happy family, she enjoyed all things Irish, listening to Irish stories and singing Irish songs. Terie was a keen sports woman who enjoyed netball, tennis and swimming. During her short illness a drive to Maroubra Beach lifted her spirits, she loved outings and lunches at Maroubra Beach with her family and friends.

Terie’s parents had a deep faith with love of the Mass and Rosary. Her aunt Dolly, our own Sister Margaret Harrington, FDNSC made a great impression on her. Terie enjoyed hearing her stories of life as a missionary Sister.  At an early age she felt called to be a sister and dreamed of going to the missions. I can imagine Terie’s delight sitting with her family as they read letters from her aunty Dolly sharing her adventures as a Missionary Sister.

All of Terie’s ’s education was in Sydney where she was educated by the Mercy Sisters. Terie was a decisive woman and on leaving school she was convinced that Jesus was calling her to follow him in religious life as a missionary Sister; however, her parents did not allow her to enter straight after school. Terie completed a secretarial course, and in 1957 she entered the novitiate at Hartzer Park and made her first vows in January, 1959. She was given the name Sr M St Thomas.

Thus, began Terie’s lifelong ministry and her epic journey as a passionate, enthusiastic educator and missionary. After spending four years teaching in Australia at St Paul's Bentleigh  and St Agnes Highet, Terie began a journey of the heart, a journey that took her to the shores of Papua New Guinea , the place she called home for 41years with the people she loved.

The Trobriand Islands, where she first went, always remained very, very special for Terie.  She loved the Islands and the people, and always kept in touch with many of her early students and the families whom she really embraced and whom she continued to have contact with throughout the years.  Many of these students would call her their mother, and their children became her grandchildren.  Not long before her death Terie said her most rewarding times in PNG were the years in the Trobs especially after she had the use of a motor bike, which her brother Maurice gave to the sisters after his visit.  Now she had the freedom to get around after school to visit the villages. This meant a deeper understanding and relationship with the school children and their families.

Terie ministered in many other parts of Papua New Guinea, including Nimowa, Sideia, and Hagita, which were also in the Milne Bay area.  Being a true Missionary, Terie, put her whole heart into wherever she was sent.  She enabled many young PNG's to become great teachers and committed leaders in many fields throughout Papua New Guinea.

In 1994, Terie was called to join the leadership team for the PNG Province and so moved to the Provincial House in Boroko, in Port Moresby.  Terie was Deputy for nine years, three of these with the last Australian Provincial and six with the first Papua New Guinean Provincial.

Since Terie’s death many tributes have come from Papua New Guinea, Sr Maria Koae, the first PNG Provincial Leader, shared stories of how much she appreciated and learnt from Teri’s many skills in administration and her qualities of companionship, friendliness and hospitality.  Another Sister spoke of her teaching career, mostly in isolated island missions and her ability to inspire both teachers and students to know God in their lives.  Others spoke of the encouraging and listening heart Terie showed to them when they were young sisters.  A young working woman wrote of the blessing Terie’s life had been to her family mentioning she had a ‘heart of gold’.  Some sisters wrote goodbye in the various languages with which Terie would have been familiar. Terie’s leadership in PNG was innovative, compassionate and always aimed for the good of the Sisters.

In 2002 Terie made a decision to return to the Australian Province where she continued to generously share her gifts in Province leadership as a member of the Provincial Council, as Director of the OLSH Associates, working with refugees in Blacktown and being a much-loved member of the Bentleigh, Daceyville and Stellar Maris communities.

Terie’s final years were spent living at Kildare Court, Maroubra. These were very happy years where she formed many friendships. She enjoyed her daily walks, drives to the beach and especially her coffee and chats with friends.

A few weeks ago, Terie was diagnosed with terminal cancer. What a time of suffering for our dear Terie. She accepted her suffering with her typical resignation and utter dependence on Jesus, the one she had loved since she was a child.

I am grateful to Srs Pauline, Helen and Evelyn for their loving care of Terie during these past weeks and to her Sisters in community whom she loved, and appreciated equally. I am also grateful to the staff at Sacred Heart Hospice for their compassionate care of Terie.

Terie was a courageous missionary, a compassionate woman of heart who drew her strength from her deep desire to love as Jesus loved, excluding no one, especially the poor and marginalised who held a special place in her heart.

We will be ever grateful to Patrick, Eileen and the McNamara family for the gift of Terie to our Congregation!

We thank you Terie for your welcoming heart, your generosity, and warm smile.

May your courageous soul rest in peace.

Go in peace dear Terie united with the one who says “Let not your hearts be troubled. Believe in God; believe also in me.’