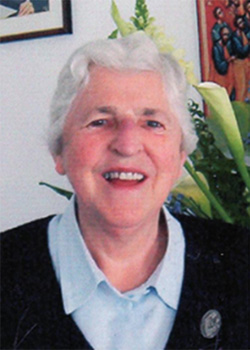 My soul is thirsting for God, the God of my life: when can I enter and see the face of God?

These words summarise Sr Maureen’s lifelong journey of faithfulness and loving care for others. Also, her sense of fun and cheerfulness were greatly appreciated by all who had the privilege to live with her.

Maureen Isobel Brazel was born in Colac, Victoria on 24th June 1931. Soon after her birth her parents, John and Margaret, took her to St Mary’s Church in Colac where she was baptised on 5th July 1931. This was the beginning of her life in a home “sound in the practice of the Catholic faith”.  They went as a family to Sunday Mass and Parish Missions and her brothers, Frank and Len, were altar boys.

Her father was a grocer and in 1933 the Great Depression was very hard on small shop owners who were very often asked to extend credit to customers and so, her parents made the decision to move to Melbourne. Here her parents ran mixed businesses in Brighton, Armadale, and Middle Park before moving in 1938 into a new house in the burgeoning suburb of Bentleigh. During the War years her father worked in the munitions factory at Maribyrnong and it was at this time that the last two children of the family, Brian and Margaret, were born. Maureen was then enrolled in St Paul’s school Bentleigh and progressed in 1944 to OLSH College Bentleigh where in 1946 when she was 15 years old her “final year class of three students had the rare honour of being the foundation Leaving Certificate class at the College”.

The years of World War 2 when Maureen was between the ages of eight and 14 years old affected her greatly during the whole of her life.  Let us listen to what she had to say about this time.  “I can recall the occasion of Australia’s Declaration of War in 1939, when the then Prime Minister gave a radio address to the nation.  The years of the War were hard ones – food and clothing rationing, shortage of essentials like petrol for our car, the absence of all  luxuries; the going off to war by most able bodied men between the ages of 18 and 35;  Air-raid shelters were constructed in back yards, in the shopping centre of Bentleigh and on the playground of St Paul’s. Air-raid drill was part of the school routine and the blacking out of our homes for security purposes was by law. When peace was declared I was in the Intermediate class at the College and I still remember the great relief this brought upon us and the unprecedented celebrations that overtook the nation at this time.”

Before Maureen came to the Novitiate in Hartzer Park on 31st May 1952 she had been working for five years as a typist/clerk in the AMP Society. She credits her time as a typist a significant one, for the skills and experiences she gained there contributed not only to her own growth and development, but also to the contribution she was able to make to our congregation. She was professed as a Daughter of Our Lady of the of the Sacred Heart on 6th January 1954.  During the next two years she studied to become a teacher and in subsequent years did much study to obtain a B.A and then later a B.Ed.

Maureen made her final Vows on 6th January 1957 and then began her long life ministry as a secondary school teacher, in Kensington, Bentleigh and Corinda. She was an excellent teacher who was greatly appreciated by her pupils and their parents. When contacted about her death the immediate response from her former students was one of praise of her as an excellent teacher, kind, well prepared, made us laugh, ‘we loved her’.  Maureen had a genuine love for her students and their families, she fostered the girls’ personal growth as well as their skill development. As they left school many of the girls moved directly into employment that often led to successful careers. She kept in touch with many of her students after they finished school and was a devoted committee member of the OLSH College Kensington Ex-students Association for several years.

Later Maureen was responsible for school administration both as deputy and as principal. In these positions she took great interest in the education and welfare of the girls in the schools and as well as caring for the staff. In the staff room after school Maureen was said to have entertaining, witty and had a great sense of fun; and there were often enjoyable and even hilarious occasions.

The next many years saw her with much more responsibility in the Province; from 1978 until 2002 Maureen was Superior/ Community Leader in Kensington, Bentleigh, East Bentleigh, Elmore, Botany and Mascot. She took on this role again at Mascot from 2008 until 2012 when she also did varied tasks including parish visitation. Here she was greatly loved by the Parishioners and our Associates as she continued to be a warm, welcoming, friendly presence, running various programs to nurture people’s spiritual life. As Community leader she was very thoughtful of the needs of the sisters and was particularly caring of those who were in any kind of difficulties. When visitors came to the community Maureen was very welcoming, thoughtful, and entertaining.

During these years she was the Provincial Bursar for some time and a member of the Provincial Council. She wrote, “While a member of the provincial team I was privileged to visit our Sisters working in the Philippines, Nauru, and Kiribati and the various houses in Australia.   These visits afforded me a broad overall view of our works and the Sisters’ involvement in them; one had to feel great pride in our Sisters for their lives and for all the wonderful work that they had contributed to.”

Sr Maureen was a faithful, prayerful religious and always true to her vocation as a Daughter of Our Lady of the Sacred Heart. She had said that “a religious vocation was always at the back of my mind.” Maureen had told us that all her years have been good ones. Her 14 years at Kensington College were among the happiest and most satisfying years of her life.  She wrote, “I worked with Sisters who were gifted, enthusiastic, supportive, dedicated. They led by example and commitment, and many remain among my closest friends.”

In 2018, as Maureen’s health was failing, she joined the community of St Joseph’s at our aged care facility, where she was beautifully cared for until her death.

We thank God for the many gifts given to Sr Maureen, we thank the Brazel family for their gift of her to our religious family.  We know Maureen loved her family greatly and held her siblings close to her heart.

We thank you Maureen for your great witness and faith filled, enthusiastic life as a Daughter of Our Lady of the Sacred Heart. May your joyful soul now rest in peace.