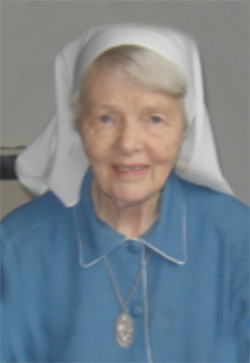 Proclaim everywhere the love of the heart of Jesus.
(J. Chevalier, le Sacre-Coeur)

During her long life as a teacher and later as a pastoral worker this has been the guiding principle of all Sr Valerian has done and been for so many people in many parts of Australia.

Born into a large, devoutly Catholic family in Toowoomba Queensland she was imbued with the faith from her infancy. She was the daughter of Muriel and Thomas O’Brien and her brothers and sisters were Dorothy, Mary, Patrick, William, Celia, Thomas, Edward, and Anthony. They were a happy, united family who were very well provided for in every way, material as well as spiritual.  She tells us that her parents and the children of various ages went to Mass every day and said the family Rosary. They also attended all that went on in the church such as Missions and Corpus Christi processions. As Church and family were of prime importance to her when she went to boarding school she was very unhappy.  All her brothers and sisters are now deceased and she, the sixth born of the nine members, is the last.

After the end of the War she volunteered as a teacher at Freneau Park and it was here that she began to know the Daughters of Our Lady of the Sacred Heart and even though she described herself as “a frivolous, pleasure seeking teenager” she had a “nagging suspicion” that she ought to be a nun. It was in the middle of her novitiate year that she knew and was delighted that this was the best possible life for her.

Many sisters have said that she was a lovely person to share their lives with and she herself appreciated the “company and inspiration of wonderful companions”. She was quick witted with a wonderful sense of humour and was able to entertain the other sisters with stories of her experiences as well as having a great gift of telling anecdotes against herself. She certainly brightened up the lives of all those who lived with her.

During her active life she had four main apostolates: as a secondary school teacher, as the superior in various communities, as a formator in the Philippines, and as a pastoral worker in different parishes.  In the schools at Kensington, Bentleigh, and Corinda where she was a teacher or the principal she was very popular with her students and a very creative teacher.  She had immense influence on the girls she taught.  During her time in Corinda in the 1970’s the girls of this small school did exceptionally well in the Senior Public Exam with two girls even topping the state in Maths. It has been said that when she was teaching there would be silence in the classroom broken by an outburst of laughter until she started again.  She taught well with much humour.  Though small in stature she had a formidable personality and demanded only the best from the girls and in this she was successful.

As a superior or formator Sr Valerian was always gentle, kind and caring and had great trust in the goodness of others allowing them to do things in the best way they could. When she was talking to a sister she listened attentively to her and had great respect for each person as she appreciated the giftedness of each sister. Her administrative skills were evident as she was responsible for the closing of the OLSH College Corinda in 1972, the building of “Hartzer House” in Manila in 1982 and in finding and purchasing the holiday house at Bilinga.

During her time doing pastoral work with the people in their homes or in hospitals the skills she showed evidence of in schools or as novice mistress were essential now. Such as, having a great interest in the welfare of the people she met, of patiently listening to them, and helping them become closer to God and his Mother, Mary. The people that she seemed to have loved working with most during this time were those at Mt Isa where she spent six years with Sr St Bernard from 2001 to 2006.

Sr Valerian was a very zealous and dedicated religious with a true love of her Congregation. One of her favourite Scripture texts, like that of Father Founder was, “Let us keep our eyes fixed on Jesus”. In the Philippines it has been observed that she often prayed before the Crucifix in the Chapel and made an act of reverence either kissing it or touching it before she left. She has said of herself, “... the Heart of Jesus gave me a longing for holiness as God wants it. The teaching years and the following years were always blessed for me, but it’s only in recent years that all the past seems a fairly superficial faith journey.  Now, at last, with the help of our Triune God I begin to live by faith and leave myself and my apostolic effectiveness entirely up to Him.” Later she could say, “I rejoice now in being nearer to truth and reality, and in having God for my “refuge and strength”.  Her trust in God filled her with a great optimism so she was able to tell us, “I view the future of the Church and of Religious life with confident trust in the Holy Spirit.”

Her last words to us are, “I am grateful for every day I have lived and learnt in the congregation ..it’s been a nice party!” and we can reply that we thank God for the gift of Sr Valerian with her untiring love and service of the Congregation.  May she now reap the rewards of her well spent life and may she now sing with St Teresa,