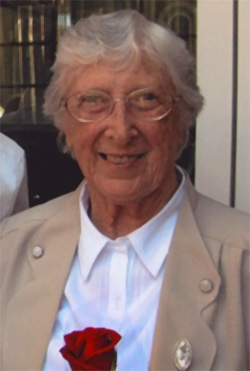 Let us rejoice and be glad and give glory to God,
for the Lord our God the Almighty reigns, alleluia. Apoc 19:7,6

This was the Entrance Antiphon for the Mass of the fourth Monday in Easter time on 5th May, the day Sr Eleanor was unexpectedly called to God. Rejoice, Be Glad, Give Glory – how many times Eleanor had been called to this in prayer and in her daily life of 95 years, 72 of which had been spent as a Daughter of Our Lady of the Sacred Heart.

Eleanor was the second child of Edward and Eileen Parker. Eleanor had three brothers. George and Brian, now deceased and the youngest, Edward, who lives in Brisbane where Eleanor grew up. Ed came to Eleanor’s 70th Jubilee of Profession celebration and she was frequently in touch with him.

Eleanor attended St Thomas’ Parish primary school, Camp Hill and moved in 1939 to Lourdes Hill Good Samaritan Sisters’ Convent School for her secondary schooling. After school Eleanor spent some years doing clerical work mainly in the Commonwealth Bank. When she was about sixteen, she asked her mother about being able to enter the convent and was told by her parents to wait till she was twenty-one. After reading the Annals, Eleanor began to think about mission life and was provided plenty of information about this as her parish of Camp Hill was run by the Missionaries of the Sacred Heart.

Some of the friends she made at this time who had similar thoughts were Sr Patricia Dolan and Maureen Hogan who became Sr Mary Terence. They were members of the Children of Mary and as well as the Grail movement.

At last she turned twenty-one and travelled from Brisbane to Bowral with Clare Hickey who also entered with her in 1946. She was given the religious name of Sr Mary Denise. Their group was the last to be professed in 1948 at OLSH Bowral before the Novitiate moved to Hartzer Park. She made her Perpetual Vows in January 1951 at Hartzer Park.

Eleanor’s clerical training and experience came in good stead in later years but she was pleased to go to Calvary Hospital in Adelaide to do her General Nurse training from 1948 to 1952 and Midwifery the following year.

In November, 1953 being appointed to Papua New Guinea, Eleanor and Sr Marie Jean Bergin sailed for three weeks from Sydney to Rabaul, East New Britain. It is good to keep in mind that at this time PNG was governed as a colony of Australia and it was another twenty years until the country gained Independence. Eleanor was appointed to what was called the “Asiatic Hospital” which was run by the government for Asiatic and mixed race people and across the road was the “Native Hospital” for the local people. There was quite a lot of racial distinction there and Eleanor found this difficult to cope with. This appointment lasted eighteen months until the sisters were withdrawn from the Asiatic hospital.

While Eleanor was still in Rabaul she was asked to help out for a fortnight in the parish office in Vunapope. This appointment lasted three years. Then Eleanor was back to nursing at the nearby Health Centres at mission stations amongst the Tolai people. So from 1957 she nursed at Health Centres at Vunadidir, Paparatava and Napapar. As the sister in charge of these centres, she trained and was assisted by PNG nurses. In these rural areas, nursing cases occurred that had not been seen at Calvary Hospital, Adelaide! From 1964 to 1968 Eleanor was the Principal of the School of Nursing at Paparatava.

Eleanor had time in Australia for health reasons, and on her return to PNG in 1969, she was asked to do secretarial work in Rome in preparation for the General Chapter. This visit to Rome and other places in Europe was a very special time for Eleanor.

On returning to PNG from the Chapter, Eleanor was asked to go to Veifa’a, on the Papuan side, amongst the Mekeo people to establish a school of nursing. The students were all PNG girls from the Papuan Southern Region. Following graduation the girls could take up nursing positions, particularly in the rural areas. In 1971 – 72 she attended the NSW College of Nursing and attained a diploma in Nurse Education. All told, Eleanor spent about seventeen years in this ministry at Veifa’a and became familiar with the different parts of the Mekeo area.

Eleanor became aware that as she aged, nursing became more difficult and so she moved to Papitalai Secondary School on Manus Island in 1988. Here for the next seven years she undertook a completely different apostolate of attending to the school’s finances and secretarial needs as well as the school clinic. Her work was much appreciated. From 1995 to 1997 she assisted with the Provincial finances while living at Boroko and working in the Provincialate.

As her health was deteriorating, Eleanor transferred to the Australian Province in 1998. She had used her talents and skills for 44 years in Papua New Guinea and was much appreciated by the sisters of the PNG Province and the people amongst whom she ministered. When speaking about our PNG OLSH Sisters, Eleanor wrote: Growing in number and able to carry on the OLSH/ CHEVALIER charism and the growing confidence of the people in general, I felt it was time to step aside and let the PNG sisters continue in the footsteps of our expatriate missionaries and that they have the freedom to do ‘things’ in their way, according to their customs and culture, while maintaining the charism of Father Founder and Mother Marie Louise – to make the Sacred Heart of Jesus everywhere known and loved.

Eleanor was very happy to be appointed to the Corinda community in Brisbane where she would be near her family. She was an active and dedicated member of community and the parish where she assisted in the parish office and in areas other than finances. She did this work for about fourteen years after her return from PNG. She came to Holy Family community at Kensington in 2015 and transferred to St Joseph’s in May 2016.

At St. Joseph’s she appreciated the loving care she received and was grateful for everything. Now, at the end of a long life, Eleanor has come face to face with God in the eternal ‘banquet’ which has been prepared for all those who have loved and sought the Lord. Thank you Eleanor for your love and dedication as a Daughter as you lived to make the love of God everywhere known and loved.