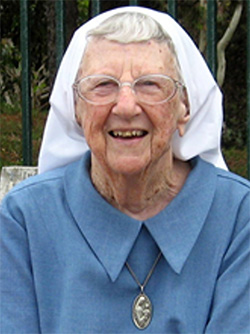 Come you who are blessed by my Father; take your inheritance, the kingdom prepared for you since the creation of the world. (Lk 5:4)

After spending 83 years in the Congregation of the Daughters of Our Lady of the Sacred Heart as a tireless missionary I am sure Sr Emmanuel would have received such a welcome from Him whom she had served so well.

Ena was born into a devout Catholic family from which she gained her love of God and his mother. She said that her father was not a Catholic when he met her mother in Cooktown but he received “the gift of faith without which I don’t think my mother would have married him.” Frederick Chapman was a marine engineer from New Zealand and Evelyn O’Neill a nurse from Queensland. Some time after their first baby was born, a boy called Rolla, they went to Timaru, Frederick’s home town, in the South Island of New Zealand and it was here that Eileen was born. When they moved to Auckland where it was warmer Ena was born in 1916. Nearly two years later the family came to Sydney and settled first in Randwick and then in Coogee. It was here that Ena came into contact with the Missionaries of the Sacred Heart and Eileen with the Little Sisters of the Poor the congregation she later joined. Two more children were born after the family’s arrival in Australia, Francis and Mary. Ena received her first holy Communion from Father Peter Treand, the first provincial superior of the Australian MSC’s and the father of the Australian MSC’s. Her family was very involved in the life of the Church in Randwick and in Coogee.

As the family lived near the sea and her father had a great love of the sea so did Ena and she spent a lot of time in the surf at Coogee, first with her father and later on her own. She became a good swimmer! In 1929 when she was still only thirteen years of age, because of the Depression she had to leave school and gained employment as a messenger girl in the Swan Pen warehouse on the corner of Sussex and King Streets in the city. When she was 18 after a Mission in the parish church she felt God calling her to “become a nun”. However, this was not yet possible as her sister Eileen had just gone to the Little Sisters of the Poor and Ena’s financial help was needed by the family. Two years later in 1936 even though she loved swimming and dancing she joined the novitiate of the Daughters of Our Lady of the Sacred Heart at Bowral. Her parents were very happy with her choice and looked upon the vocations of their daughters “as a precious gift from God.”

After her profession in 1938 she began on her epic journey as a teacher in Northern Australia for the next 73 years. Her first mission was to Thursday Island to where she was sent because she could swim. The sisters had to travel by boat from Thursday Island to Hammond Island for catechetics and not long before a boat carrying the sisters there capsized and one of the sisters drowned. When the war started in the Pacific in 1941 this intrepid missionary accompanied 25 children who were evacuated to Cooyar, about 70km from Dalby in Queensland and then in November, 1944 she joined the Melville Island evacuees in Carrieton, South Australia. Having had a trial run as a teacher with Sr Vianney at Our Lady of the Rosary Kensington who said she would be a good teacher, Sr Emmanuel taught from 1939 in Thursday Island and then in the two places of evacuation. After her arrival in Port Keats in 1946 she completed her school education by correspondence from Western Australia and then followed this with Theory and Practice of Education with the South Australian Department of Education. She said this gave her great satisfaction.

For the next 49 years in Port Keats [now called by its indigenous name, Wadeye] Melville Island, Bathurst Island and Daly River, Sr Emmanuel was an Early Childhood teacher who prepared the children for their first Holy Communion. Also, she was highly regarded by the members of both the Catholic Education Office and the N.T. Education Office for the way she embraced the new trends in education and she was considered as one of the best Early Childhood teachers of mathematics in the Northern Territory. At the end of 1995 she had to officially retire as a paid teacher. The following year when she began as a “volunteer full time teacher” of Year 2 at Wadeye she was awarded the Medal of the Order of Australia for service to education, particularly in Aboriginal communities in the Northern Territory. During the investiture she received much praise as an extraordinary Australian who for 57 years of educating young people in remote Aboriginal communities is a remarkable example of dedication and selfless service. For the next four years she continued as a full time classroom teacher and then for the following 12 years as a remedial reading teacher in the mornings. Then at the great age of 96 she returned to Kensington convent where she was a much loved member of the community here and then for the last few years at St Joseph’s. It was amazing the way she was always interested in the news and who was winning in the cricket! Her ready wit and her interest in everything will be greatly missed.

The people of Wadeye have never forgotten her and when they heard of her death sent a message of sincere sympathy to the sisters because of their loss. Several of the indigenous teachers from Wadeye are present today to pay their respects.

Throughout her life her love of God, the Church, our Blessed Mother, our congregation, and the people she served was very evident. The words of St Paul to the Corinthians can certainly be applied to her, “We prove we are servants of God by great fortitude in times of suffering,....by our purity, knowledge, patience, and kindness; by a spirit of holiness and by a love free from affectation.”

Sr Emmanuel spent her entire religious life endeavouring to live out our spirituality, to make the Sacred Heart of Jesus everywhere loved.

Emmanuel thank you for your wonderful witness of a joy filled, faith filled life.

May your gentle soul rest in peace.