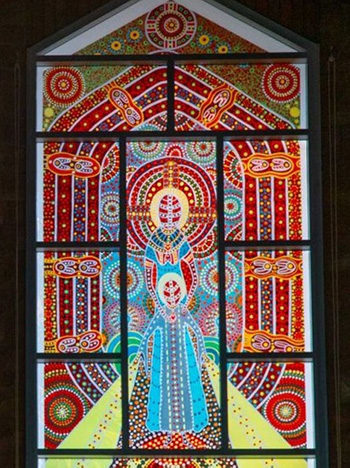 It's the Mother Mary and Jesus Christ, but not as you might have seen them before.

Our Lady of the Sacred Heart (OLSH) Catholic church in Alice Springs has commissioned an Aboriginal artist from its congregation to design a new sanctuary window celebrating the blending of Catholic and Indigenous beliefs, to pay homage to its many Aboriginal parishioners.

"I thought about how my ancestors taught me, their beliefs, and I remembered how they celebrated God in their own way," said the artist, Kathleen Kemarre Wallace, an eastern Arrernte woman.

"I feel so happy to see it because this is my first stained glass, and I'm so happy to give it to the parish and all of the Arrernte people of this land," she said.

Ms Wallace was 13 when she moved from the bush to Santa Teresa, an Aboriginal community an hour's drive from Alice Springs.

"[Catholicism and my family's traditional beliefs] are similar — it wasn't hard for me.

"My grandfather's ancestors gave him a dream of three circles — grandfather, father and totem spirit — like the Holy Trinity."

That design sits in the window's apex.

"I became a Catholic. My family all came from the bush and they all became Catholic," Ms Wallace said. 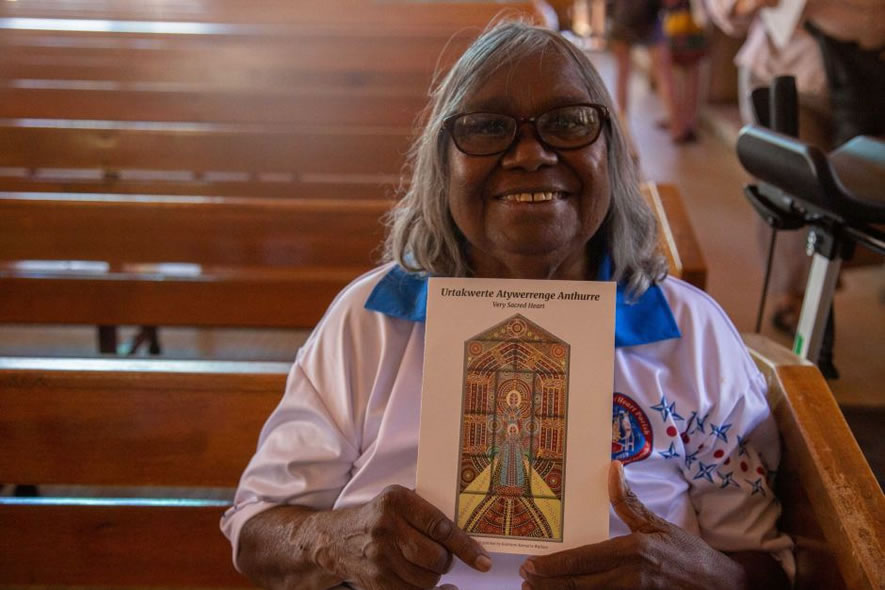 Her design shows Mary and Jesus as Aboriginal people, and she painted their bodies with designs used in traditional Arrernte celebrations.

"I first started painting on bodies for celebration when I was six. It has been really different learning to paint on canvas."

Ms Wallace said the painting's dots represented "everything in the world — we are all connected".

Missionaries brought Catholicism to Central Australian communities in the early 20th century, building missions, translating the Bible into local languages, and encouraging the adoption of Catholicism.

"The fusion of much western Catholicism and trying to explore the deep-seated wisdom of the Arrernte people, and how they understand the mystery called God, has been challenging and faced a lot of misunderstanding in terms of culture." 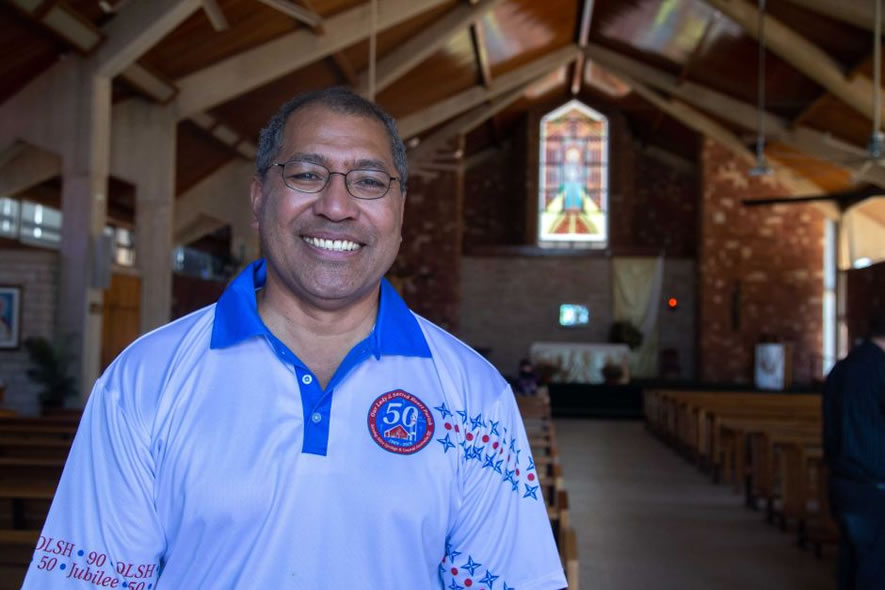 Your culture, which shows the lasting genius and dignity of your race, must not be allowed to disappear.

Do not think that your gifts are worth so little that you should no longer bother to maintain them. Share them with each other and teach them to your children. Your songs, your stories, your paintings, your dances, your languages, must never be lost.

"We hope that we will respect more of their culture, more of their religiosity, and also not undermine what the missionaries are trying to do.

"This is a work of art displaying Mary the Mother of God as our patron from an Arrernte worldview. It's exciting, I'm so happy today — I hope that all Catholics consider this church a home.

"Deep down, it has been the desire for everybody to come together to appreciate each other's cultural, artistic contribution. And we hope that this is just a very humble beginning and we grow closer and closer to each other." 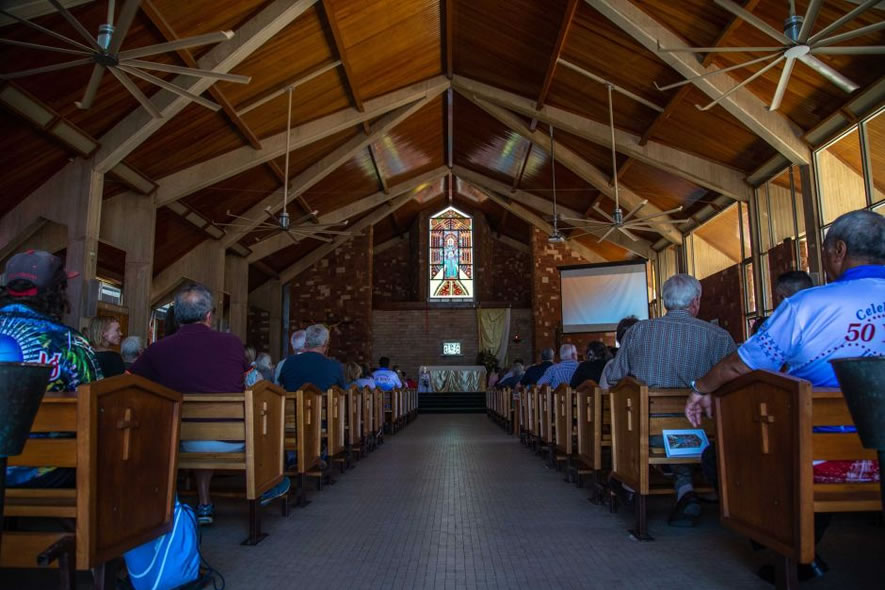 "A third of the people in the Northern Territory diocese are Aboriginal," he said.

"That journey is an ongoing journey and forever we keep looking at how we can build on the goodness of thousands of years of tradition and spirituality." 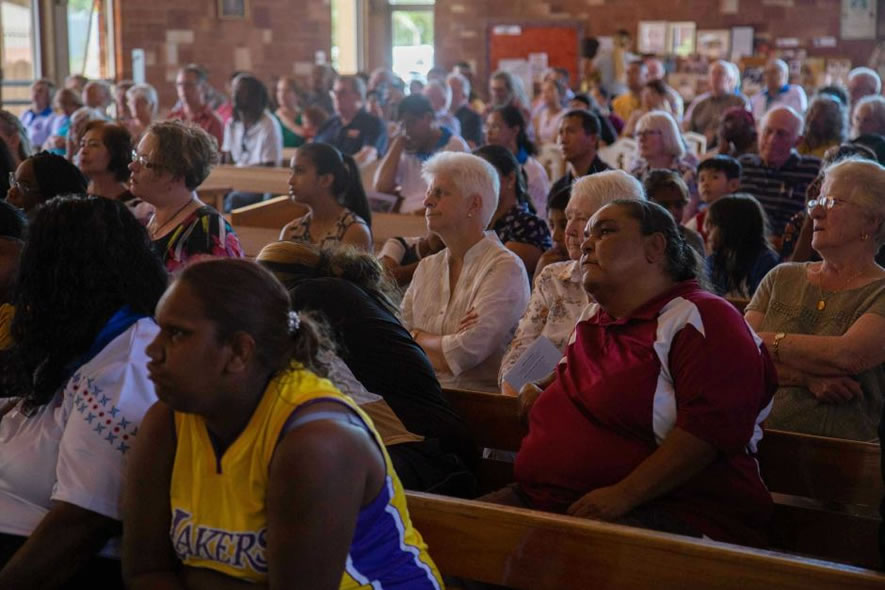 PHOTO: In the Northern Territory, a third of Catholics are Aboriginal. (ABC Alice Springs: Samantha Jonscher)