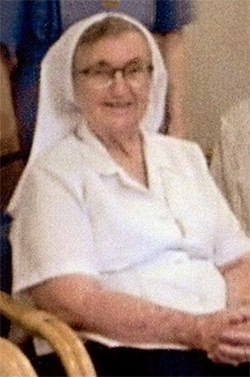 Praise the Beloved! Sing a joy-filled song praising the Lord among the people.
Praise the Holy One with dancing, with melodies and voice!
The humble are adorned with honour; the faithful exult in glory,
singing for joy with thankful hearts! (Psalm 149 adapted from Psalms for Praying : Nan C. Merrill)

Sr Rita Agnes Hinemei Torpey was a Daughter of Our Lady of the Sacred Heart for 67 years. A woman of integrity, decisiveness and clear sighted in what her aim in life was and today we would sum that up as striving to be on earth the heart of God. Rita led a very full life before and after she gave herself completely to Jesus at her first religious profession on 6th January, 1952.

Rita was born on 4th October, 1930 at Muswellbrook, NSW, to Margaret May Doherty and Stanislaus Joseph Torpey. She was the eighth of twelve children whose home, called “Liseux”, was a place of happiness in a very Catholic atmosphere. Rita has left memories of very happy activities in a country area where her father was a busy baker who ensured his family was well cared for and all the children were given opportunities for secondary education. Rita won a bursary and went as a boarder to St Catherine’s College, Singleton run by the Sisters of Mercy and completed her Leaving Certificate in 1947.

Rita wrote that the biggest changes at “Liseux” commenced gradually in 1944 when her mother suffered a stroke and died aged 51 in 1946 when the youngest in the family, Frances, was 7 and Rita was 15. Her father died in Sydney in March 1949, just 59 years old from bowel cancer. Rita said “So, we had another big sorrow losing another parent, leaving sorrow for us all and especially losses for the youngest members”.

Rita had long wanted to be a missionary nun – especially after reading a book “Echo from Africa” when she was 13. However she realised that she was not mature enough to enter the convent straight from school and so spent a year at home helping in the family bakery. When she turned 18, she commenced nurse training at St Joseph’s Hospital in Auburn, Sydney, setting out to do a four year course from 1949 to 1952.

However the good Lord had other ideas and about 16 months into her course, she found herself at Kensington being interviewed by Mother Concepta about entering this missionary order. This resulted in Rita entering the Postulate at Hartzer Park on 31st Mary, 1950, taking the name Sr Michaela.

After making her first profession of vows, Rita thought she would continue her nursing training but she ended up doing primary teacher training in the training school at Kensington. Amazingly this training took only one year and so Rita commenced her long teaching ministry at St Thomas Aquinas Primary School in Bowral and in 1954 she continued in Bowral at OLSH Boarding School for boys. A busy and interesting experience!

After making her final vows on 6th January, 1955, Rita moved to the Northern Territory and taught in High Schools at Alice Springs and Darwin. In 1959 Rita’s missionary dream came true as she went to Manus Island in Papua New Guinea. In this area Rita spent 35 years of her 52 years in PNG. Thus began a long association with the people of Manus Island firstly at isolated Patu, then Bundralis and finally in 1967 at Papitalai where the school was built as it was closer to the town for supplies etc for the boarders.

Rita’s other ministries in PNG were at OLSH Girls’ High School, Vunapope; in Rabaul where she was Area Superior and visited the communities of sisters on the islands of New Britain and Manus and also at Boroko in Port Moresby where she was the Community Leader. At various times during these years was on the Provincial Council and also lived at the Provincial House at Gordon in 1992 to assist in the preparation for the Provincial Chapter.

Rita’s leadership qualities were well known and she was very involved in the ongoing formation of the PNG Sisters. Rita was a wonderful pray-er and close to her God. She realised that there was a need to present students with a method to help them to pray so she wrote a book “Lord, Teach Me to Pray”. This was much appreciated and in circulation in schools for many years.

Rita’s heart was full of music and song which she expressed in the concerts and choirs she conducted as well as the songs and hymns she wrote in both Pidgin and English. Rita was alive and energetic, concerned and generous with her talents. She was creative in many ways and encouraged our PNG Sisters to be so as well. Often her creativity came through in many new projects she thought up for the good of the ministry she was in and often the other staff members would feel the need to curb the next “bright” idea she had.

Rita did much for Papitalai High School, Manus. It was through her generous fundraising activities that there were many improvements made in the school. On her holidays in Australia she would collect so much to take back with her that she would request the Defence Force to assist her and get the goods taken to the naval base at Manus.

After she retired from formal teaching she became manageress at Papitalai where funds were limited and her big dream was to set up a piggery project to generate income for maintaining and improving facilities. This came to be and helped the people of Manus in providing pigs for big feasts, educate students in animal husbandry and improve the standard of pigs produced.

In recognition of her services to Education in Papua New Guinea, Rita was awarded the Medal of Logohu from the PNG government as well as the Order of Australia. She was also the winner of the Patu/Papitalai Alumni Service Medal for extended and extraordinary service to these schools. But probably what touched her most was being given the name Hinemei when initiated into the Manus tribe. This was a great honour and the celebration was full of many speeches, dances and singing and, of course, a Manus feast.

When Rita left Papua New Guinea for good and transferred to the Australian Province for health reasons in 2013, Sr Relida Gumur, the PNG Provincial Leader, spoke to Rita on behalf of the sisters of the Province:

We are here to thank you but also to thank God for gracing us with your person. Rita thank you for allowing God to use you to touch so many people in so many ways through your work. Thank you for sharing your life, your faith with us. We are the fruits of your hard work, the fruit of the seed you planted when you first arrived in Papua New Guinea on 10th January, 1959. You have been very much part of the building up of the PNG Province and so we have come to where we are today. Sr Rita, as we thank you and as we say goodbye before you leave us, we want you to know that you are held in love and with gratitude in our hearts.

So with new vigour – and some sadness of heart – Rita settled into community at Kensington. One of her main focuses was making jewellery to assist projects in Papitalai. Sadly in December, 2014 Rita suffered a massive stroke which left her severely incapacitated and she became a patient at St Joseph’s Aged Care Facility on 27 January, 2015. This was a sad time for her loving family and the Sisters and surely she heard Jesus singing within her while she was unable to communicate with us.

Dear Rita Agnes Hinemei Torpey - all those who have known and loved you over these years, entrust you to the loving Heart of Jesus, knowing how our mother, Our Lady of the Sacred Heart, has been your companion and so you have brought Jesus and Mary’s love to others in your own particular way.