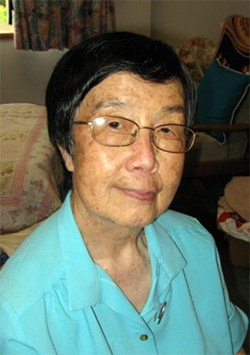 Love is always patient and kind: it is never jealous:
love is never boastful or conceited;
it is never rude or selfish … Love delights in the truth:
it is always ready to excuse,
to trust, to hope and to endure whatever comes. (1 Cor. 13:4-7)

Sister M Paulita gave expression to this great song of love of St Paul in her daily living of the spirituality of our Congregation, the Spirituality of the Heart, and its motto, “May the Sacred Heart of Jesus be everywhere loved”. She herself said that she was always ready to help others cheerfully and without expecting praise or reward. Those of us who have lived with Paulita or spent time with her will readily recognise the truth of these words.

Sophie was born in Rabaul on the 14th April 1933, the seventh and last child of her devout Catholic parents, John and Maria. She was baptised in the Church of St Francis Xavier, Rabaul, by Father J. Madigan MSC, two weeks later, on the 30th April. Sophie’s parents were born in Canton, China, but had made their life in Rabaul for the betterment of their children: Mary, Rose, Xavier, Oliver, Clare, John, and Sophie. Her parents and five of her siblings have predeceased her. To Sophie’s brother, Oliver, to her sisters-in-law, Leonoa, Anne and Janet, and to her nieces and nephews and their families, we offer our deepest sympathy and the support of our prayers. You know well her deep love for you, her pride and joy in you, and her gratitude to you.

Sophie’s father, John, kept a store in Rabaul while her mother, Maria, remained at home to care for the children. However, life was not easy in Rabaul. The people had to contend with volcanic eruptions, earthquakes, and tidal waves. Paulita spoke of her fear, as a child of four years of age, when in 1937 Vulcan erupted, emitting dense volumes of smoke, covering Rabaul with volcanic dust and turning day into night. She remembered how her mother grasped her under her arms, covered both of them with a sheet, and fled to higher ground for safety, there to join many others in a makeshift camp that was being established.

Frightening as volcanic eruptions were, they were as nothing compared to the life-changing experience of the Japanese occupation of Rabaul and subsequent bombing by both Japanese and Allied forces during the Second World War. Paulita recalled that the people were treated as prisoners of war and initially we made to camp in the MSC Monastery at Vunapope Mission, women and children upstairs and men downstairs. As the days moved on, many families - including those of Sisters Betty Seeto and Mary Chan - were taken by boat to out-stations where the suffering was more extreme than that experienced by Paulita’s family and others who remained in Rabaul. These latter were transferred away from the centre of the town. Each family was forced to dig its own tunnel and they slept in these damp tunnels each night. It was only when the Japanese surrendered that the people learnt that the tunnels were intended as their burial site as the Japanese planned to seal the tunnels at the end of the war and gas the people to death. Paulita reminisced, “At the end of the war, on the Feast of the Assumption, we were all reunited and assembled at the one place. I can still hear that night: there was rejoicing and mourning all night through”.

Sophie’s education began at the Saint Teresa Yang Ching School for Chinese children in Rabaul but it was interrupted by the war; it later continued at the newly established Sacred Heart School. At the age of nineteen, Sophie left Rabaul for Sydney where she completed her secondary education at Brigidine College, Randwick, and then at the Our Lady of the Sacred Heart Juniorate in Leura. She remained ever grateful to her eldest brother, Xavier, who supported her during her school days in Australia.

Highly recommended by Father J. Dwyer MSC as a person “of excellent character and coming from a splendid family”, Sophie entered our novitiate at Hartzer Park on 31st May, 1955; she made her First Profession on 6th January, 1957. Now known as Sister Mary Paulita, she began her sixty years of dedicated and willing service in the Congregation. Her main work was caring for the sisters in the community by her cooking and sewing. This took her to various communities in New South Wales, to Darwin in the Northern Territory, to Papua New Guinea and Nauru. She was fitted for this work by courses she followed in the Sydney Technical College in cooking and sewing. The dressmaking course she completed at the Haute Couture Academy qualified her as a dressmaking teacher at Loreto and Limana Vocational Schools in Port Moresby and later at our College here in Kensington.

The ministry Paulita loved most began in Nauru, where she spent seven years in the 1960's. Here she was able to help people in need in whatever way she could and bring them to know the God she loved so deeply. She instructed many people in the faith and prepared them for Baptism and other sacraments. This ministry was carried out principally among the Chinese workers in the place called the “Location”. In the early eighties, then living again in Kensington, Paulita studied Mandarin, the most commonly spoken Chinese language, at Sydney Technical College, so that she could speak with more Chinese people. Thus equipped, she began her ministry of home and hospital visitation and religious instruction to the Chinese people for whom she had a passion to bring to the Catholic faith. She loved to go to St Peter Julian’s Church, Haymarket, to attend the Mass in Chinese and then continue her ministry of preparing people for Baptism and the children for First Reconciliation and First Holy Communion. Paulita derived great joy from her ministry among her own people.

The above words speak of Paulita’s ministry. Behind this is a woman who cannot be captured in words. Paulita was a very devoted and much loved member of our religious family, the Daughters of Our Lady of the Sacred Heart. Paulita was a lovely community member. She always considered the comfort of others before thinking of herself and into her later years she continued to offer a warm welcome and a cup of tea to everyone who came to see her. She was a gracious woman, appreciative of all that she received; she had a lovely sense of humour and great capacity to laugh at herself. Paulita had a simple yet deep spirituality: she was a woman of prayer. Surely, she would have been asking Jesus and Mary to bring the Chinese people among whom she counted herself privileged to minister, to come to know the God she so deeply loved. In every need or difficulty Paulita turned to St Joseph for whom she held a special affection. All her life she prayed in loving gratitude to Our Blessed Lady, the Mother who had cared for her and her family during the War.

We praise God for his many gifts to Sister Mary Paulita.
We thank God and the Choi family for their gift of her to our religious family.
We honour you, dear Paulita, and thank you, and we give you back to God,
grateful and privileged that you have been our Sister and our friend.
May your generous and devoted soul rest in peace.