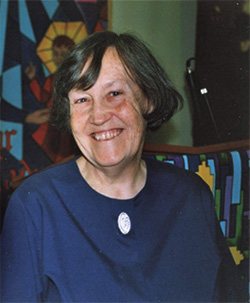 The other day I was looking back at various articles that Marilyn had written for our Associates' Newsletter. One, in particular, attracted my attention and I would like to share a little of it with you this morning. Marilyn entitled the piece, A Time for Singing "Alleluia". In it she spoke of a decorated Easter egg and she wrote:

"Life will not always be a box of chocolates;
may not even be wrapped in pretty packaging.
It certainly won't always be sugar coated and frosted with icing flowers.
It won't always be joy and gladness
and our alleluia may be sung from a throat choked with grief and sorrow,
but in the words of Robert Browning's ‘Pippa's Song’ ...
‘all things are passing, God alone remains’.
As we learnt from our Catechism when we were young
‘God made us to love and serve him here on earth
and to be happy with him forever in heaven.”
“And so”, Marilyn concluded, “Alleluia is our song.”

This says so much about the Marilyn we knew. One who bravely sang her Alleluia throughout her life, so much of which was lived with chronic pain and debilitating health. As Thursday, 2nd of November, the feast of All Souls, got under way our dear Marilyn went on her heavenly journey singing her joyful “Alleluia.”

In the Gospel of Matthew Jesus issues this invitation:

Come to me, all you who labour and are over burdened and I will give you rest. Shoulder my yoke and learn from me, for I am gentle and humble in heart, and you will find rest for your souls. (Mt 11:28)

These words always gave great comfort to Marilyn as she learned to live within the limitations of her illness, striving always to be an authentic, faithful, and prayerful religious and, at the same time, working in a full-time apostolate. She always said that this effort contributed very much to her growth and development as a human person and a woman.

Marilyn Georgina was the eldest of the six children of Kenneth and Mary Knolder. To Rosemary, Angela, Kenneth, Jeffrey and Ron, and to their partners Elizabeth, Carmen, John and Gary, and their children Emma, Megan, Christian, Kent and his wife Elise we offer our sincere sympathy and our gratitude for the gift of your dear sister and beloved aunt to our religious family.

Kenneth and Mary were very diligent in passing on the faith to their family. Her father’s health was poor, because of injuries received while he served in the Army during WW11. Money was hard to come by, but all the children were sent to Catholic schools. The faith was very important in Marilyn’s family with the family Rosary being said each evening; their home was consecrated to the Sacred Heart; grace was said at meals; weekly confession was the norm and there were little altars in the home to honour the Sacred Heart and Our Lady. From her earliest childhood Marilyn went to Mass each day, often riding her bike for two miles or catching the bus.

During her early school years Marilyn was taught by the Josephite and the Dominican Sisters. When she was nine she met the Daughters of Our Lady of the Sacred Heart. She said that all of these Sisters inspired her and enriched her faith. At this time she joined the League of the Blessed Sacrament, and was a promoter of the Annals and the Apostleship of Prayer. It was at this young age that Marilyn also became aware of her desire to be a religious sister. When she was only twelve years old she began reading books on religious life that her Mother had bought for her.

Marilyn relished her secondary school days at OLSH College Enfield where she was an able student and school leader. She loved learning Art of Speech and Irish Dancing and she excelled in both these fields. She also belonged to the Marian Girls’ Club.

At the age of 15 she left school as she needed to help with the family finances. She gained employment in the Public Service as an endorsing clerk with the Register General of Deeds Department. She made daily visits to pray in the Adelaide Cathedral and at this time began to enjoy her first social outings. However, she never wavered from her first desire and on 25th March, 1962, at the age of 17, and with the full blessing of her parents, Marilyn entered OLSH Novitiate at Hartzer Park, Burradoo.

Marilyn made her first Profession of Vows in 1965 and went to live at Kensington where she began her new life of teaching and study; first she gained the Leaving Certificate at OLSH College Kensington and then studied to be a teacher both in Sydney and in Melbourne. She was very creative and artistic and became a brilliant teacher who gave her students a love for learning. She took a personal interest in each one and kept in contact with many of them over the years.

Education was Marilyn’s passion for the rest of her life: from 1967 to 1979 she taught in the primary schools at East Bentleigh and Highett in Melbourne, and in Mascot, Sydney. In 1980 she began her years of study which continued throughout her life. She first gained a Bachelor of Arts, with honours in English Language and Literature. This was followed by a Graduate Diploma in Educational Administration and then a Master’s Degree in Religion Studies which she completed in 1993. From then on, while she was full time teaching English and Religion at OLSH College Enfield, Adelaide, or at Chevalier College, Bowral she also undertook many courses, in education, spirituality, and English. There are too many to mention here!

In 1996, Marilyn suffered a life-changing illness and as a result her ministry changed direction from secondary education to adult education and formation in the Chevalier Charism with the Associates of the Daughters of Our Lady of the Sacred Heart. She began this ministry at Mascot but soon moved to Kensington where she was to live until 2016 when, because of deteriorating health, she moved to St Joseph’s.

In this new apostolate Marilyn’s life of prayer and study was used to great advantage helping the Associates in their spiritual journeys. The Associates greatly appreciated the talks she gave at their meetings and the inspiring articles she wrote for the Associates’ newsletter. She also loved to compose poetry, much of which has been compiled in one book. (One of her poems is on the back of your Mass booklet.) In 2007 Marilyn completed a Diploma of Ageing and Pastoral Care at the Catholic Institute of Sydney. She had decided to do this because of her work on the Parish communion round, being a volunteer at St Joseph’s, doing personal shopping for the residents there and helping with the sisters’ Medical Forms. She gave joy to the residents by using her artistic skills in decorating the dining room and chapel for feast days and other special occasions.

Even after she herself became a resident at St Joseph’s Aged Care Facility Marilyn continued to use her artistic talents as she made scrap books, some for boys and some for girls, for the Children’s Hospital. She made beautiful crocheted rugs, looked after her flower garden on the balcony, and kept up with her friends by email. She also continued to send the Time Magazine to the Sisters in South Sudan. This was greatly appreciated by the staff at the school and also by the pupils there, all of whom are starved of information about what is happening in the world outside South Sudan.

Marilyn loved beautiful things – God’s wondrous creation, the many and varied works of human hands, poetry, flowers and birds and animals especially cats! Who could forget her lovely scarves which brought beauty to the place from which so much of her suffering came. Books she devoured, creative ideas flowed freely from her mind and I often begged her to stop thinking up new projects!! Marilyn was kind, thoughtful and noticed when others were suffering or worried or needing something to make life a little less stressful – and she would try to ease the situation.

In the last few weeks Marilyn was unable to do so many of the things she loved to do. She was, however, always grateful for the help that others gave her.

So today we remember this dear person, friend and sister Marilyn. She has been God's Heart to so many of us during the past years. We have seen her as she struggled with poor health, uncomplaining and brave. We have listened to and read her words of comfort, support, advice and inspiration. We grieve her loss but, at the same time we rejoice with her that all suffering is ended. She is now with God whom she loved so deeply, and rejoicing in the wonder of God's eternal embrace. She is singing “Alleluia” forever in heaven. We thank God for her life with us. Rest gently, dear Marilyn.