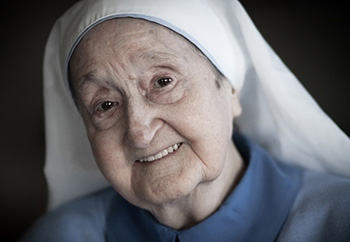 May the Sacred Heart of Jesus be Everywhere Loved!

All I want is to know Christ and the power of his resurrection
and to share his sufferings by reproducing the pattern of his death.
That is the way I can hope to take my place in the resurrection of the dead. (Phil.3:10-11)
There are three things that last: faith, hope, and love;
and the greatest of these is love. (1 Cor.13:13)

Sister Mary Berenice was the daughter of Alexander Edward Twohill and Eliza Kenny.  She was born in Murwillumbah, New South Wales, on 9th November 1916 and baptised Mary Dympna at the Sacred Heart Church there on 4th December 1916. She was the eighth child of eleven children and was the first girl after seven boys.  Another boy was born two years later and then there were two more girls. The Twohill family was very happy and closely knit, as well as a very devout Catholic one.  Each night, all knelt for the rosary and on Sundays her father drove the family twelve miles to the Church for Mass. Her father was an early member of the Knights of the Southern Cross and of the Hibernian Society. He was President of the Tweed Shire for many years and inspired his family with an interest in politics as a way of improving society.

Dympna received her education from the Sisters of St Joseph with whom she boarded for many years. It was from the sisters that she learnt about devotion to Our Lady of the Sacred Heart. At a young age she felt the call to serve God as a missionary and so at seventeen and a half she wrote to Mother Mary Concepta to apply for admission to the Congregation of the Daughters of Our Lady of the Sacred Heart. She gained her interest in the missions from her grandmother who worked much for the Church and the African missions and in whose home she read in the Annals about our sisters’ missions in the Pacific.  Her lifelong love of the Sacred Heart began in her home and with her grandparents who drove miles in an old sulky to attend First Friday Mass.

After finishing school Dympna taught for one year with the Sisters of St Joseph. At this time she loved the social life introduced to her by her brothers. She enjoyed dancing and sport: tennis, running, jumping, and swimming so much that she tried to forget her earlier desire to become a religious but she came to “… see it was a terrible mistake and with God’s Grace overcame the temptation” (from her letter asking if she could enter the Congregation). Dympna entered the Congregation of the Daughters of our Lady of the Sacred Heart at Bowral on 31st May 1934 and was given the name, Sister Mary Berenice.  She was professed on 6th January, 1936.

Because she had studied music before she entered the convent, from the time of her profession she was a music teacher. As she had never studied the violin, she did this in her early years, teaching and studying at the same time. After a year in Kensington she transferred to the old St Bernard’s school at Botany and in 1939 went to teach music at Bowraville, on the North Coast.  Here she also helped Sister Mary Bernard Haughey as a teacher in her school for aboriginal children.

After Bowraville she left on her missionary journey for the island of New Britain where she taught in Rabaul at the St Joseph’s school for children other than Chinese. Not long after her arrival World War II broke out and Sister Mary Berenice and the other sisters of her community, together with the Missionary of the Sacred Heart priests and brothers, and the Missionary of the Sacred Heart sisters were taken prisoner by the Japanese. They were released at the end of the War after three years and seven months of imprisonment. This story has been documented in interviews given by Sister Mary Berenice to journalists and shown on our television screens in the ABC drama, “Sisters at War”.

Sister Mary Berenice’s health did not permit her returning to Rabaul and so for the rest of her life she taught music in Bentleigh, Elmore, Queenstown, Alice Springs, Corinda, Kensington, Daceyville, Botany, Mascot, and Bowral. It was at Bowral that she taught Vietnamese boys who had come as refugees on boats. It was “much against the grain” to always be a music teacher as what she loved was doing parish work, visiting the people who needed help in their homes, and preparing children for the sacraments.  She did this whenever she could and she endeavoured to prepare herself for this work by completing a number of courses in Sacred Scripture and Liturgy, for which she gained certificates.

After “retirement” Sister Mary Berenice worked at the Marian Centre helping to spread devotion to Our Lady of the Sacred Heart and promoting the consecration of the home to the Sacred Heart. She also began anew the Archconfraternity of St Joseph, who was so dear to the heart of Father Jules Chevalier MSC, our Founder. She spent time at “Cana”, a drop-in centre in nearby Surry Hills for homeless and street people. She also carried on in our chapel what is known as “The Cenacle,” when people gather to pray specially for priests.

Sister Berenice wants to be remembered as a good religious and a true and faithful daughter of Father Chevalier MSC.  She wishes to thank God for her wonderful parents, brothers and sisters, and finally the Congregation of the Daughters of Our Lady of the Sacred Heart and all those who have helped her during her life. She concludes with “ALLELUIA!”.

We thank you, Sister Mary Berenice: you have been a true and faithful Daughter of Our Lady of the Sacred Heart throughout your eighty-one years of religious profession. We join your “Alleluia!” acknowledging that you have now attained your life’s ambition as you are welcomed into the loving embrace of God.

Our Lady of the Sacred Heart Convent Chapel, Kensington
8 November 2017

1. The person has been changed from first to third, from I to she.