Listen to their voices, hear their stories and walk together into the future

2017 Senior Australian of the Year, Sr Anne Gardiner of the Daughters of Our Lady of the Sacred Heart, graciously accepted an invitation to write for the edition of Aurora appearing in NAIDOC Week.

I’ve seen a few things in my time but if I was asked to give one piece of advice it would be this: our identity as humans is in who we are, not what we are. Who we are is only possible through our spoken languages and our lived cultures.

It is a message that is relevant today, as it was when I was born in Gundagai, NSW, the youngest of four children of Mollie and William Gardiner. We were a happy farming family.

My mother was a devout Catholic so the Rosary and Mass played a big part in my childhood.  I vividly remember Sunday mornings preparing the horse and sulky. With Dad holding the reins, Mum and us four squeezed into the sulky and we trotted into town to attend Mass.

We rode our horses to primary school in Gundagai which held many adventures and were very happy days. I attended St Joseph’s Ladies Secondary College in Albury, NSW. These years were full of fun and friends. I must admit that I fooled about rather than put my mind to work.

I remember being on the basketball court and two Daughters of Our Lady of the Sacred Heart gave us a picture of sisters in a canoe with a prayer to Our Lady on the back. At the time I was doing my exams - the card simply forgotten. Later on the card fell out, those canoe-paddling sisters inspired me and I began to think seriously about my life. When I was only 18 I wrote a letter to the Superior in Bowral. Now there were a few religious congregations in the Bowral area, but my letter went to Hartzer Park, Burradoo. The rest is history.

I entered the Congregation of the Daughters of Our Lady of the Sacred Heart in May, 1949. I made my first profession in 1951 and made final vows in the old convent in Darwin in 1954.

I arrived on Bathurst Island on 23 November 1953. Wow! What a welcoming I received. There were three other sisters here, a priest and two brothers.

Bishop Gsell established the first mission on Bathurst Island in 1911. I often ponder his thoughts and reflections. He wrote:

“Fifty years ago when I started my missionary life, anthropology was still in its infancy. If it had been developed, it would have been very useful to me and would have helped me to avoid many mistakes. I had to establish contact with the Tiwi alone, slowly, prudently. I had to endeavour to the best of my ability to learn gradually their habits and customs so as to penetrate into their minds and hearts without hurt or shock. I was the humble instrument of a Divine task.”

I have also made many mistakes along my journey, I was insensitive many times. But now, as I am reaching the end of my days with the Tiwi people, I pray that in all humility I have been a small instrument in the Tiwi Catholic story. 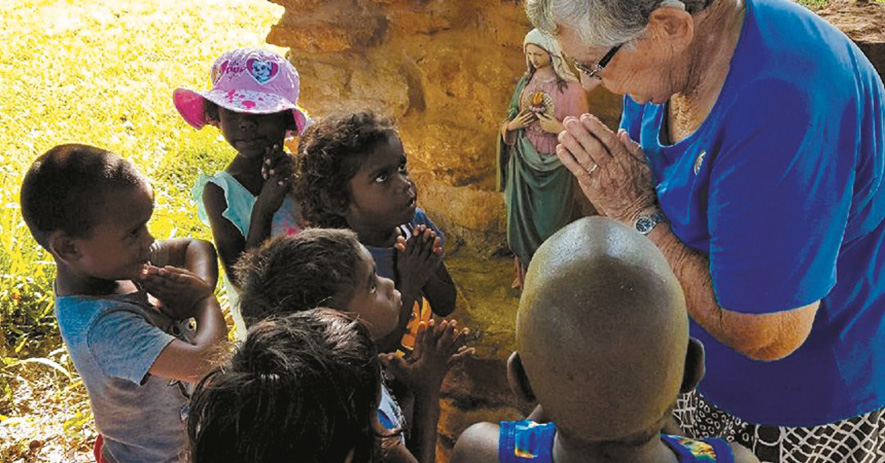 My memories are many. Originally school hours were spent underneath the old Mission Church. Long desks and seats, chalk, slate pencils and slate boards. School hours were from 8am until noon, then we were off to complete chores like gardening, sewing or hunting. Our first school was built in 1957 and our first Tiwi ladies to be trained as teachers commenced in the 1970s. The ‘70s and ‘80s were years of great change in the education system. Remarkable people like Sr Tess Ward, Fran Murray and others were responsible for the commencement of a bilingual school. It became a Tiwi School where children were first educated in their own language.

Sadly, the bilingual approach faded out and English became the norm for education across the board. Their language and culture exist as one. To me we have failed the students.

In its wisdom the Government saw otherwise and, like it or not, five hours of English teaching became the rule. Yet one cannot blame the Government all the way. The local principal at the time, Leah Kerinaiua, received little to no support from her community.

My years as principal of the school are now well behind me. Since then I have been able to spend more time with the Tiwi people. I devote many hours to projects that will provide long lasting benefits to the community. We have set up the Patakijiyali Museum and many, many hours have been spent developing the different galleries within the museum. Please visit the museum if you ever travel to Bathurst Island. I’m proud to say it is now operated by strong local women who are doing an outstanding service for the community.

When I received the Senior Australian of the Year award I said it has been my joy to witness and experience Tiwi people manage organisations, conduct schools and health clinics and train others. They have done this by being confident in who they are. There are many ways to be a leader; the English language does not have a monopoly on leadership.

My firm belief is that the future of the Tiwi people lies in their own hands because we, non Tiwi, come and go. How many of us have genuinely tried to remain silent and let the Tiwi run their own affairs? How many of us have really learnt the art of listening in the context of a values system that is in stark contract to our western ways? Do we realise that they had their own systems to deal with issues for thousands of years before Europeans arrived?

These thoughts resonate with the sentiment of the recent Uluru Statement. It is necessary, right and just that the first peoples are recognised in today’s political structures. How this happens should be up to the Aboriginal peoples to decide. As a nation we are being asked to listen to their voices, hear their stories and walk together into the future.