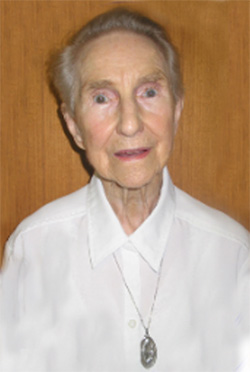 May the Sacred Heart of Jesus be everywhere loved. Forever!

You are God’s work of art, created in Christ Jesus to live the good life
as from the beginning he had meant you to live it. (Eph 2:10)

In everything she did in her long and varied life Sister Mary Constance did everything to perfection. She worked quietly and unobtrusively and her artistic skills were always in evidence.

Anne was born in Essendon, Victoria, on 21st May, 1915. She was the third of the six children - three daughters and three sons - of Peter Patrick Daley and his wife Janet Mary, nee Atley. Her parents and her siblings - Mary, John, Patricia, Brendan and William - have all predeceased her. We warmly welcome Sister’s nieces, nephews, grand-nieces, grand-nephews and cousins who are with us today. We are delighted you have been able to join us and we offer you our deepest sympathy on the death of your loved aunt, great-aunt, and cousin. We are mindful of those unable to be with us and hold them in prayer.
Anne’s father was a farrier and wheelwright. She often said that she inherited her artistic talents from her father and her good memory from her mother.

After completing the Victorian Education Merit Certificate Anne worked as a dressmaker but after being hospitalised with peritonitis she was convinced she should become a nurse. She completed her training at St Vincent’s and the Children’s Hospitals in Melbourne. Apart from General Nursing she also gained qualifications for invalid and convalescent nursing, and for children’s nursing. She took these skills to Queensland where she worked in Toowoomba, Gin-Gin, and Mackay from 1944 until 1949.

As a young woman Anne was greatly affected by World War II. Her three brothers served in the armed forces. William was killed at the age of 21 during his training; Jack was for three and a half years a Prisoner of War in Thailand; while Brendan served in the Navy on a destroyer. The two latter brothers died in 2005.

By the time Anne entered the Congregation of the Daughters of Our Lady of the Sacred Heart in November 1949 she was a very experienced nurse. Because she wanted to go to the missions, she did not enter The Sisters of Charity with whom she had trained. She was inspired to join our Congregation by her cousin, Sr Margaret Atley, who had left for the Gilbert Islands (now Kiribati) mission not long before. When Anne came to the novitiate she chose the name Constance, the name of a Sister of Charity with whom she had worked at St Vincent’s Hospital, Melbourne, and whom she greatly appreciated and admired.

After her profession in July 1951 Sr Mary Constance assisted in the infirmary and the sacristy at Kensington Convent for a few months and then, in January 1952, left for the difficult mission of Channel Island in the Northern Territory. This was a small rocky island where the conditions were basic, terrible really, without even water which had to be brought daily from the Australian mainland. Here for two years she nursed the people who were suffering from Hansen’s disease (Leprosy). This would have been very trying for the newly professed Sr Mary Constance as she was always very particular in her dress and liked everything to be beautiful. She did her best to improve the environment where the patients were living and being treated.

She was very happy to be asked to join the founding community of the Our Lady of the Sacred Heart Hospital at Randwick in 1954. Here she worked hard for ten years nursing in difficult circumstances. During this time she learnt theatre nursing at the Little Company of Mary Hospital, Lewisham, and, on ‘graduating’ as a theatre sister, helped to set up the operating theatre in the new OLSH Hospital. Her next field of ministry was as infirmarian to the young boys in our boarding schools in Toowoomba, Queensland, and Bowral in the New South Wales Southern Highlands. This was demanding work and meant being available around the clock.

After having nursed for thirty years Sr Mary Constance requested a change in her ministry. For the next twenty years she used her artistic talents in floral arrangements and her musical ability to honour the Lord whom she had served so well as a nurse. She served as sacristan in Kensington, Bentleigh, Highett, Randwick and Elmore until 2008 when she came to St Joseph’s.

It was during Sr Mary Constance’s years in Bentleigh from 1974 to 1980 that her ministry changed significantly.

The artist must be in her work as God is in Creation, invisible and all powerful, one must sense Him everywhere but never see Him.
(Gustave Flaubert.)

As she explained: “I had a natural flair for painting, though I had never had any art lessons. One day I noticed an advertisement in the Women’s Weekly about lessons in porcelain painting. I thought to myself that I would dearly love to learn, but it seemed a wild dream. I mentioned it to Sr Mary Lenaghan who encouraged me, and when I spoke to Sr Margaret Gustus, the Superior, she approved wholeheartedly.”

Her “wild dream” became reality after she enrolled in the porcelain painting class and began to produce works of her own. From the proceeds of the sale of these works she was able to buy her own kiln. This allowed her to really go into production of beautiful pieces: vases, plates, pendants, lockets, brooches, cups and saucers, salt and pepper shakers, cruet sets, patens, christening mugs, candlesticks, framed tiles, Chinese urns, plaques and cookie jars. She also made plates to be inlaid into tables and covered with plate glass. One of these tables had three plates each depicting a bird in its natural setting. Another very large plate was of a stag head with beautiful antlers and mountains in the background. This latter table was exhibited in the Melbourne Art Gallery from where it was sold, and Sister was commissioned to paint another one like it. She entered some of her work in the Royal Melbourne Show where she gained a first prize and a highly recommended. This helped her work to become known and many orders followed.

Sr Mary Constance continued this work until 1994 when she went to Elmore where the climate and dust were not conducive to it; she also found that, with her advancing years, it was getting beyond her. However, at Elmore the people greatly appreciated her organ playing; they also remarked that she was a lovely presence in the parish as she brightened everyone with whom she came into contact.

Sr Mary Constance has written that china painting as a religious ministry may have seemed odd to some but for her it was very appropriate. She was able to use the talent God had given her to create things of beauty which brought joy to others. She had a mission as religious in a milieu where none others were present and she hoped that she was a witness to God the Creator of all beauty.

We pray she is now enjoying her reward in heaven surrounded by the all the beauty that God gives.