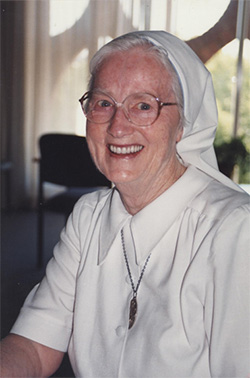 Singing is the sign of the heart’s joy (cf. Acts 2:46).
Thus St Augustine says rightly, “Singing is for one who loves”,
and there is also an ancient proverb: “Whoever sings well prays twice over.”

When we remember Sister Mary Paschal we associate her immediately with music and the liturgy of the Church which she loved so much. How many times did we hear her play after Mass the joyful tune of Jesu, Joy of Man's Desiring! She was meticulous in her preparation of hymns and her commitment to good quality liturgy. We are sure she will be checking out today’s liturgy and we hope it will be pleasing to her!  Her mother was an accomplished pianist and used to play in front of the silent movies in the King’s Theatre.

Sr Mary Paschal was born in Mount Gambier, South Australia on 17 December 1928 and named Alicia; from then on she was called Sally.  She was the eleventh child of her devoutly Catholic parents, May Josephine and Michael Simon Duigan. She kept in a place of honour in her room a large photo of the twelve children of the family.  This photo was taken on the day of their father’s funeral when Sally was only five years old.  Her father’s death at such a young age was a cause of great suffering to the family.  Her mother became quite ill and spent a considerable amount of time in hospital in Melbourne.  The older siblings kept the family together and a great bond existed between them all.  Sally felt keenly the fact that she was the last remaining member of the twelve siblings. This endeared her even further to her many nieces and nephews who wanted to keep the connection with her and her generation. We warmly welcome each of you here with us today and hold in prayer those unable to be present.

After completing her primary education at the Convent of Mercy in Mt Gambier, Sally went to board at Cabra Dominican College, in Adelaide.  During this time she furthered her musical studies, in piano and violin, at the Conservatorium of Music where she gained an A.Mus.A for performers in piano. At this time the examiners of the Australian Music Examinations Board commended “Miss Duigan’s depth of musical understanding and fine intensity of feeling as displayed in the Beethoven Sonata Opus 13.No.8” and said that her performance showed plenty of power and fire. She also obtained an ATCL for teachers in the Violin from the Trinity College of London.

Sr Mary Paschal had always wanted to be a missionary, especially to China, and in 1949 she gained her mother’s reluctant permission to join our Congregation. She asked Mother M Concepta Henschke, in her letter of application, to assure her mother that if she went to the missions she would not be eaten by cannibals! In his reference her parish priest recommended her as a “...splendid example of practical piety...and one of those rare gifts of God to a parish.”  She entered the Congregation on 31st May 1949 and made her first Profession on 6 January 1951.

The first years of her religious life from 1951 until 1963 saw her as a music teacher in Our Lady of the Sacred Heart Colleges at Kensington, Enfield, Bentleigh and then at Kensington again. She then spent the next twelve years at “Hartzer Park”, Burradoo, initially as Postulant Formator and then Novice Formator.  After a six month’s break she returned to the novitiate for a further twelve years.

In her role as Novice Formator, Sister M Paschal was entrusted with a great responsibility on behalf of the Congregation. Many young women, with their hopes and dreams of becoming Daughters of Our Lady of the Sacred Heart, were placed into her care. These were the years immediately following Vatican Council II [1962-1965] which ushered in significant changes for the Church and Religious Life and Sister worked to keep abreast of these changes. She read extensively to ensure that the Novices were given the best possible formation to prepare them for a future that would be very different from the past. She instilled in the novices a great appreciation of music in the liturgy and the shared liturgies with the De la Salle novices caused amazement to all who participated in them and are still remembered fondly. The novices came from different cultures – Papua New Guinea, Australia’s Indigenous and Torres Strait Islander Peoples, Kiribati, the Philippines, and the Australian mainland. The Christmas concerts would include carols from all these countries which the novices would sing with great gusto.

Sister gave the Novices opportunities to develop their talents and skills and emphasised that they would need to be strong and resilient and ready for anything in the future. There was also plenty of gardening and raking and planting of trees and cleaning and cooking!

Sister M Paschal kept in touch with former novices and she supported and encouraged them in their chosen paths, and took an interest in their families. She kept in touch with Sisters who went to work in our missions and would send welcome gifts. She was sadly aware that there were some novices and sisters she had hurt over the years and it was her hope that they would forgive her.

In whatever she did throughout her long life her main purpose was to make the Sacred Heart of Jesus known and loved. The power and fire displayed in her music was also shown in her love and enthusiasm for the congregation and for our Founder, Jules Chevalier MSC. In this she exemplified what St John of the Cross, one of her favourite spiritual guides, has said, “Love effects a likeness between the lover and the loved.”

It seems that the ministry in which she excelled was that of working in various parishes. Here she became again “a rare gift of God”. The Liturgy course she undertook at the Liturgy Institute in Carlow, Ireland, had enhanced her skills for parish ministry and she put them to good use.  Whether she was in Tara, East Bentleigh, Kilburn, Alice Springs, or Elmore her work in the parishes was greatly appreciated as she visited the sick and aged parishioners, prepared the parish liturgies and played the organ in the churches. In her visiting of the people she was a great listener to them in their troubles and offered support in whatever way she could.  The people in the parish loved her as she was very hospitable and helped people to feel at ease.

In each community where she lived she organised and trained the choir, played the organ in a way that it could almost sing too, and made sure all the liturgical celebrations were endowed with the beauty they deserved.  All this was done in order that our God would receive the best praise that we could offer.

Sister Mary Paschal, your kind presence, your beautiful smile, your encouraging words and your infectious love of Our Lady of the Sacred Heart and our congregation will be greatly missed. May you rest in peace.