Congratulations to Sr Anne Gardiner: The 2017 Senior Australian of the Year

The Senior Australian of the Year for 2017 is Catholic nun Sister Anne Gardiner from the Tiwi Islands.

A Catholic nun who has spent half a century helping the Northern Territory's Tiwi people has been named Senior Australian of the Year.

Sister Anne Gardiner was bestowed the honour on 25 January at a ceremony in Parliament House's Great Hall.

The 85-year-old used her acceptance speech to call for greater recognition of Australia's indigenous peoples in policy. 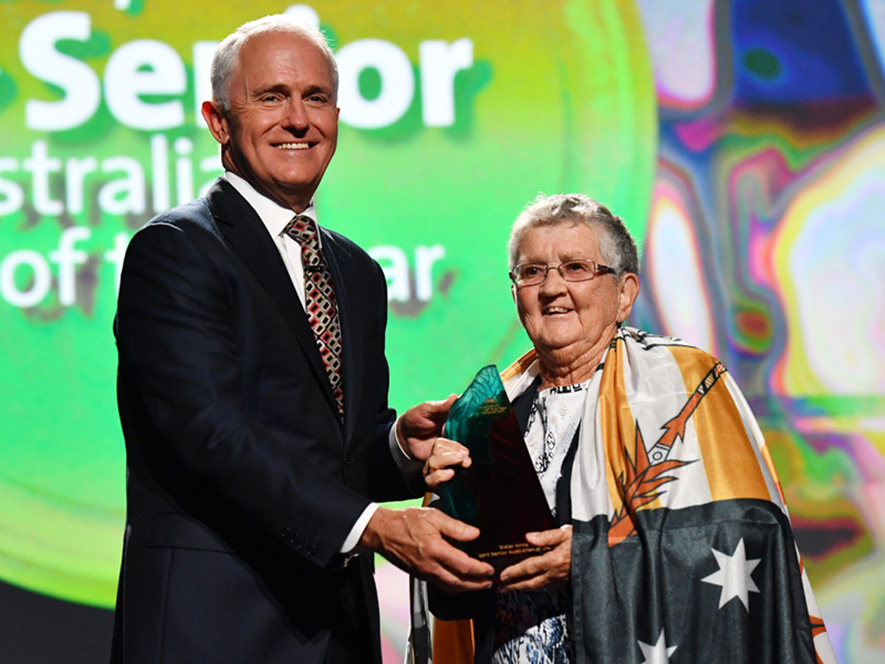 "My hope is that this will be redressed in my lifetime," Sister Anne said, with the Tiwi Islands flag draped over her shoulders.

"It is of paramount importance that those responsible for policy development consult with the relevant persons and groups among our First People, so that policies may recognise and appropriately include their language and cultures, particularly in areas such as leadership, education and employment."

Sister Anne arrived on Bathurst Island in 1953 and has worked tirelessly with the indigenous community.

As well as being principal of the local primary school, she runs regular prayer meetings and over the years has set up several community clubs - from mothers' groups to Little Athletics.

She also founded an op shop and cafe to help raise money for the community.

As an advocate for tradition, Sr Anne played a key role in establishing the Patakijiyali Museum - a place that helps preserve the Tiwi language and culture.

"Her selfless approach to helping others and sense of giving have made a big impact at a grass roots level," the National Australian Day Council noted.

Sister Anne lauded the Tiwi people for their ability to maintain businesses, conduct schools and health clinics in the face of substance abuse, suicide, domestic abuse and other signs of a community in stress.

"They have done this by being confident in who they are, as their language and culture remains strong.

I acknowledge the Ngunnawal People, the traditional custodians of the country on which we are gathered, and pay tribute to the unique role they play in the life of this city.

I am most humbled and grateful to receive this award. I accept it in the name of all Daughters of Our Lady of the Sacred Heart who have lived and ministered among Australia’s indigenous peoples for more than a century, and on behalf of the Tiwi People of Northern Australia in whose life I have been privileged to share for more than 50 years as an invited member of their community.

As persons, our identity is in WHO we are, not WHAT we are. WHO we are is made visible through our spoken languages and lived cultures.

It has been my joy to witness and experience Tiwi people manage organisations, conduct schools and health clinics, train others in a range of areas, and administer businesses. They have done this by being confident in WHO they are, as their language and culture remain strong. They have done it too, while having to confront substance abuse, suicide, domestic violence and other signs of a community in distress.

Sadly, some of the cultural understandings and their incorporation into policies which enabled communities such as the Tiwi to maintain and develop their language and cultural strength, while simultaneously engaging with the wider world, are not in place in Australia today. My hope is that this will be redressed in my lifetime. It is of paramount importance that that those responsible for policy development consult with the relevant persons and groups among our First Peoples so that policies may recognise and appropriately include their languages and cultures, particularly in areas such as leadership, education and employment.

I pray that all people in our wonderful country, Australia, regardless of language, culture, skin colour or religious belief, may stand tall as proud Australians. Thank you.