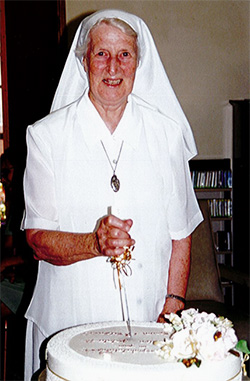 May the Sacred Heart of Jesus be everywhere loved

… It was God, who decided that we were fit to be entrusted with the Good News,
and when we are speaking, we are not trying to please people
but God who can read our inmost thoughts. …
Like a mother feeding and looking after her own children,
we felt so devoted and protective towards you
and had come to love you so much, that we were eager to hand over to you
not only the Good News but our whole lives as well. (1 Thess 2, 4, 7-8)

Early last Saturday morning, Sr Marion Whelan’s long life, given for others in the service of her loving Lord, as captured in those words from the letter to the Thessalonians, came to a peaceful end as she responded to His call: Come, you whom my Father has blessed, take for your heritage the kingdom prepared for you since the foundation of the world.’ (Matt 25, 34). Sr Marion then went gently to meet her Creator God, whom she had served so faithfully, as a Daughter of Our Lady of the Sacred Heart for over sixty eight years.

Marion Anne Whelan, or Molly, as she was known by the family, was born in Denman, in the Hunter Valley, NSW, the only daughter and second child of Roger and Grace’s four children. Her parents and brothers John and Fred, who have pre-deceased her, would, no doubt, have given their beloved daughter and sister a loving welcome as she entered her heavenly home. To her brother Roger and her extended family and friends we offer you our deepest sympathy and the assurance of our prayers at this time.

Marion’s parents married shortly after her father returned from World War 1. They commenced a dairy farm on a block of land on a ‘soldiers’ settlement. Life for this family, who had four very young children, was not easy, as Marion’s father suffered from poor health as a result of war injuries. Recurrent droughts and the Depression meant that the family faced a constant struggle during those years. Marion recalls: The obviously happy marriage of my parents, despite all the hardships, their deep faith and a loving, supportive atmosphere at all times had a profound formative effect on us children. Primary schooling for us was in a one-teacher bush school with much support from my mother who had been an Infants teacher at the Manly convent school.  The teacher also took me for secondary schooling until his sudden death. Then I was sent to Katoomba to live with an aunt and completed the last six months of my schooling, up to Intermediate standard, at Mt St Mary’s College which was conducted by the Sisters of Charity. I was offered a scholarship to undertake the Leaving certificate, but I declined in order to help at home and let my younger brothers continue their schooling. My brother, John Patrick,( Pat), was already attending Marist Brothers College Kogarah.  Returning home, I spent the next year helping on the farm and then took the only available office job in the district, in a newly-opened butcher shop. World War 11 broke out and the whole social pattern changed. There were few young men left in the district, as most had enlisted.  Several were killed and my brother Pat, who was in the RAAF, was reported missing during the invasion of Europe and later confirmed dead, along with all the crew.

In 1943, Marion was forced to move to Sydney seeking work which she obtained in a small factory, as a secretary / accounts clerk. Marion continues her story: My faith was given deep roots in my family through the teaching and example of my parents. Fairly early in my life I talked about being a nun without knowing what it really meant.  Through the years the idea kept recurring. Finally concluding that God was asking this I thought of a missionary order but did not know one except I had heard of the Marists.  Once at a Theresian meeting I heard Fr Connors MSC speak of some nuns who worked with him on Melville Is in the Northern Territory and was impressed by what he said, but he did not mention the name of the Order. Looking up the Marists in the telephone Directory, my eyes lighted on the Daughters of Our Lady of the Sacred Heart, and remembering Fr Connors, I wrote to them. The rest is history! Marion had an interview with Mother M. Concepta and on March 25, 1946 she entered the Postulancy at Bowral. She wrote: from the beginning I felt at home with the spirituality of the Congregation which came across strongly in the congregational prayers and spiritual exercises.

After her First profession of vows in January 1948, Sr Marion, as she was now called, moved to Kensington where for the next six months she studied for the Leaving Certificate. In the June of that year she was asked to undertake nurse training at Calvary Hospital North Adelaide. Over the next five years, Sr Marion successfully completed her General and Midwifery nurse training before taking up general nursing duties at OLSH Hospital Randwick in January 1954.

In August 1954 Sr Marion was called upon, at very short notice, to replace Sr M. Benedicta Carroll at Port Keats mission. Sr Benedicta gave Sr Marion, ‘many useful hints’ during a ‘crash course’ over one day. Sr Marion recalls: I found it hard to relate them to reality since I had never previously seen a Mission station or, for that matter, an aborigine.  After a rather uneventful first sea journey, and the conquering of the treacherous landing, Sr Marion, together with Mother M. Gemma, the Superior of Darwin, and Sr John Bosco, another newcomer, arrived at the mission station, which was perched on a barren, stony hill. Sr Marion was to remain at Port Keats, as sister-in-charge of the hospital, for the next four and a half years. Infant and maternal health and welfare were a major concern. The care of the non-infectious leprosy patients, the treatment of spear wounds, crocodile mauling, snake bite and teeth extractions, were also a few of the challenges upon which Marion reflected: My city hospital based training had done little to prepare me adequately. Learning by doing is a worrying process when lives are at stake. The simple faith of the people was a constant lesson. During this time, 1954 -1959, Port Keats was still a very isolated and poor community, where the inter-dependence between people and mission staff was high; the participation of the people in the various projects was encouraged. I learnt much and I had my own struggles when I was asked to move and to leave a place and a people whom I had come to love and admire.

The next move for Sr Marion was to the leprosarium at East Arm which had been built by the Australian Commonwealth Government. It opened in 1955, when the one hundred and eighty patients, the Sisters and staff were transferred en masse from the Channel Island location, to their new home, which was now the largest leprosarium in Australia. Sr Marion was appointed the Superior of the Community in 1959 and those sisters who lived and worked with her spoke of her ability to foster an atmosphere of peace and contentment throughout the leprosarium. Sr Marion, or Mother Marion as she was then, was said to be able to cope with anything; she understood the aboriginal people and brought the best out of them, encouraging them to take a pride in their ‘home’ and contribute to such things as establishing gardens and caring for the buildings. East Arm was a ‘melting pot’ of people from different races and tribes; it was non-denominational, a government establishment staffed by Catholic Sisters. A non-Catholic journalist wrote: There is something about the place – some hidden strength, which is nevertheless felt in the people who look after the patients – the Sisters. Mother Marion has been given credit for engendering such a climate, by her own graciousness, unique dignity, gentleness, her quiet strength, her sense of humour and fun and her acceptance of all peoples, no matter what their colour, creed or belief.

At this time Dr John Hargrave was appointed the medical superintendent at East Arm. To him is attributed much of the advancement that was being made, at the time, in the treatment of leprosy, or Hansen’s disease.  Mother Marion was one of his willing pupils and devoted time to working with Dr Hargrave in the area of research and pioneering of new techniques. In the New Years Honours of 1962 Mother Marion was awarded the Order of the British Empire for services to nursing in the Northern Territory, above and beyond the call of duty. This award was presented by the Queen herself with the ceremony taking place on the Royal Yacht Britannia, which was berthed in Darwin Harbour. Sr Marion thought of this award as an award to the whole team of Sisters, without whose support she believed that she could have done very little.

In 1965 Sr Marion transferred to Bathurst Is for twelve months before moving to Our Lady of the Sacred Heart Hospital at Randwick, where she was Community Leader from 1966 until 1971 and Matron from 1966 until the hospital’s closure in 1975. She served on the Provincial Council from 1976 until 1983 and for two of these years was Superior of Bowral before being appointed to the General Council in Rome for the next ten years.  Returning to Australia in 1994 Marion was Superior at St Joseph’s for two years and Randwick again for another six years, before returning to Bathurst Island for two years. In 2004, Marion joined the Community of Holy Family at Kensington, where she was a much loved and respected member of the Community until 2013 when ill health necessitated her transfer to St Joseph’s.

Sr Marion acknowledged that her years involved in Provincial and General Administration, within the Congregation, were times of immense enrichment for her personally for as she wrote: I had the opportunity of seeing first hand the Sisters and their apostolates in so many different settings and the great variety of their responses within the framework of our charism. For the Sisters, throughout  our Congregation, Sr Marion was a woman of quiet, reflective wisdom, a woman of warmth and integrity, having a deep sense of justice, who drew her strength from her prayer life and deep, union with her loving God and Her Mother, Our Lady of the Sacred Heart. Sr Marion, you have run the race to the end, … kept the faith. (2 Tim. 4, 8), Well done good and faithful servant, Enter into the joy of the Lord. (Matt. 25:23)  May you now rest in peace with your loving God.