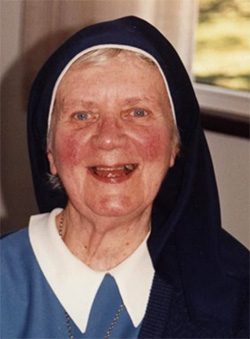 May the Sacred Heart of Jesus be everywhere loved

Let the message of Christ, in all its richness, find a home in you.
Teach each other and advise each other in all wisdom.
With gratitude in your hearts sing psalms and hymns and inspired songs to God;
and never say or do anything except in the name of the Lord Jesus,
giving thanks to God the Father through him. (Col 3: 12-17)

These words taken from the letter to the Colossians, were part of the Second Reading for the Mass celebrated on the Feast of St Mary of the Cross MacKillop, the day on which Sr Marie Cecile, during her daily nap, peacefully left this earthly life, no doubt to join the heavenly choir to ‘sing psalms and hymns and inspired songs to God’, something which she had done so joyously for a greater part of the one hundred and one years and nine months of her life!

Mary Cecilia Sykes, known as Cecily, was born in Sydney, the only daughter and second child of Stephen and Anne’s three children.  Her parents, brothers, Fr Brendan msc, Myles and sister-in-law, Marie have pre-deceased her. To her nephews, Paul and Stephen, her niece, Anne Maree, their partners and families and her cousins and their families, we offer our deepest sympathy and the support of our prayers as you grieve the loss of your much loved aunt and cousin, who has been so much a part of your family for so many years.

Cecily grew up in the Sydney suburb of Annandale, where she received her primary education from the Josephite Sisters, while attending St Brendan’s school and her secondary education from the Good Samaritan Sisters at St Joseph’s Rozelle, where she gained the Intermediate certificate. After leaving school, she joined the staff at Grace Brothers.  Cecily wrote in her memoirs, During the depression, as a teenager, I worked for six years as a ‘Ticket writer’ at Grace Brothers, to supplement the family income, which was needed to educate my brothers, as secondary students at Marist Brothers High School, Darlinghurst.

Further glimpses of life for Cecily at this time are gleaned from her writings as she continues her story: Ours was  a faith-filled and musical home: my Mother taught us the early stages of the piano and the Sisters of St Joseph and the Good Samaritan Sisters taught us piano and violin.  I was engaged, as a teenager, as one of the main organists at the parish church, and my brother Myles was an excellent violinist. … During this period, whilst working at Grace Brothers, I was attending Darlinghurst and Ultimo Technical Colleges and Justin O’Brien’s Art Studio, once a week in the evening. I gained a ‘Ticket Writer’s’ certificate, as a commercial artist.  I was a member of St Brendan’s tennis Club and played competition tennis at the week ends.  I went out with the girls at work and attended various dances and balls when available. Life was full and enjoyable.

During this time, Cecily’s brother, Brendan, joined the Society of the Missionaries of the Sacred Heart. She enjoyed visiting him at the Monastery at Kensington, every third Sunday of the month, where she remembers being very impressed with the spirit of the priests and students, whom she encountered there at that time. It was during this time, too, that one of the MSC priests encouraged Cecily to think of the Religious Life as a commitment.

In February 1937 Cecily formally applied to the Provincial of the Daughters of Our Lady of the Sacred Heart seeking permission to enter the Novitiate. In March of the same year, the parish priest of St Brendan’s, Father Hudson,  in his reference for Cecily wrote:  … I find that Mary Cecilia Sykes of this parish, is a girl of excellent character and has shown positive signs of having a religious vocation.  In April Cecily entered the Postulancy programme at Bowral, where she was given Sister Marie Cecile as her name in religion. In January 1939, she made her First Vows as a Daughter of Our Lady of the Sacred Heart.

Following her Religious Profession, Sr Marie Cecile moved to Kensington where she was able to continue her studies in music. In 1943 Sister began her music teaching apostolate in Wynyard, Tasmania. For the next twenty one years, Sister taught, music in the Communities of Alice Springs in the Northern Territory, Daceyville, Mascot, Bellingen, Leura and Bowraville, in New South Wales, Corinda in Queensland and Elmore in Victoria, returning to Wynyard on two more occasions, and Alice Springs, for a second time. While in Wynyard in 1964 and 1965 and Croydon, Victoria in 1966 to 1968, Sister combined the roles of Community leader with that of music teacher. For the next twenty nine years, Sr Marie ‘Cec,’ as she was fondly called, was a much appreciated member of the Bentleigh Community, in Victoria. Here she continued to teach music, play the violin and cello and conduct the school choirs, as well as being a contributor to the daily life, within the community. Sister spent fifty active years in the music apostolate. One is left to marvel at, not only her musical prowess, but also her gifts of patience and perseverance, as she tried to share her love and appreciation of music with countless young people and adults, while trying to foster this appreciation in these willing and not so willing students! Sister was also the organist in the local parish church, and was often responsible for the parish choirs.  She loved to share these great gifts which she had received from her loving God.

Sister Marie Cec’s music rooms were always ‘hives of activity’, with Sister never sparing herself as she worked to develop the gift for music in her pupils. Sister not only taught the piano and violin, but also formed small orchestras, so her students could perform together and give recitals, on a small or grand scale. It was obvious that her students admired and loved her, for they often asked after her in later years.

While living in the Communities of Croydon and Bentleigh, regular musical afternoons were a part of Sr Marie Cec’s program. On these occasions Sister usually teamed up with Mrs Fordham, a very ‘colourful’ person and gifted violinist, who would either come to the Convent or have Sister join her in her home in Kew. The Sisters were always welcome to attend these afternoons, as Sister Marie Cec was anxious to share her love of music, with whoever was willing to participate or listen.

After leaving Bentleigh, Sister spent some time at Randwick and then at Kensington. While no longer taking music lessons, Sister’s love of music did not diminish and she could often be heard playing the piano, in the dining room prior to lunch.  This gave Sister and any others who were in the vicinity, much joy as the gentle notes drifted throughout the building.

In 2005, Sister moved to St Joseph’s, where, for as long as she was able, she continued to make music and where, until she went for her nap last Monday afternoon, she was still able to share her smile and her handshake with those she met or with those who lovingly cared for her.

Sister Marie Cecile, for you, your prayer life was an integral part of your daily life, may you now join the angels and saints in the heavenly choir as you continue to pray in the words of Psalm 108 : My heart, O God is steadfast; I will sing and make music with all my soul. …For great is your love … your faithfulness reaches to the skies.  Be exalted, O God above the heavens; let your glory be over all the earth. (Ps 108)

May you loving Creator God, whom you have served so faithfully for over seventy seven years as a Daughter of Our Lady of the Sacred Heart, now grant you eternal rest.  May you rest in peace.