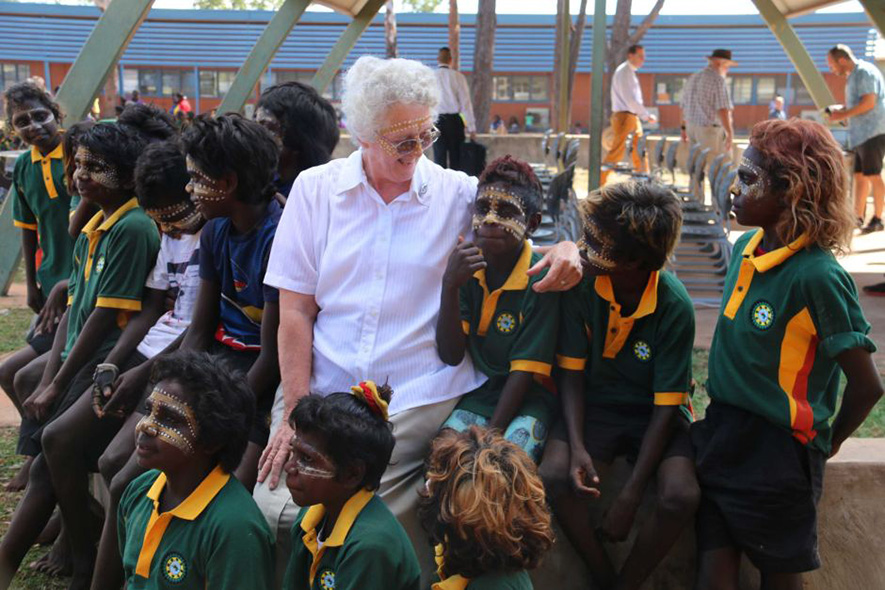 Sister Tess Ward has her face painted traditionally, to mark that she belongs to the land in the Aboriginal Community of Wadeye, 400 kilometres from Darwin.

Class has been cancelled so the community can use their ancient culture to honour Sister Tess on her appointment to the Order of Australia for her work in bilingual education.

The 70-year-old nun has worked in the community, the largest in the Northern Territory, for decades running the bilingual language program at the local school.

"It's actually an overwhelmingly joyful day for me and touched me very deeply to see so many people and the children dancing," Sister Ward said.

"And people coming together in their way to honour me and show their respect in a cultural way.

"I can see that they meant that because they came ... Indigenous people don't do anything unless they really want to do it."

Sister Tess has spent her life developing bilingual literacy programs, not just in the West Daly region but also on the Tiwi Islands and in the fledging nation of East Timor.

"My passion and my energy is going into working with Indigenous people who want to keep their culture and language strong," she said.

However, she said she should not be getting all the credit, and Indigenous languages should be celebrated as national treasures.

"I feel I should be congratulating [the community] because they've held their language, they hold their culture dearly, they honour their land," she said.

The powerhouse of the school's bilingual program is the literacy centre.

It is run by local experts who paint and animate colourful resources for students.

"These kids are like any kids ... they like anything that's bright and colourful, but I think mostly because what we write and what we prepare for the classes are things that relate to their culture," Sister Tess said.

"There's nowhere we can just hop on the internet and just buy books in Murinh-Patha."

Student Puthalang Bunduck said she enjoyed learning about her country at school.

"I know dreaming stories from my mother country," she said.

"I like learning about my country at school so that when I grow up I'll pass it on."

Thanks to this perseverance, the Wadeye Program is one of the few that has survived and is an example of successful bilingual education.

The teaching resources all use native plants and animals as well as dreamtime stories to educate the children.

Deminhimpuk Bunduck is one of the teachers who was taught as a child by Sister Tess and now writes stories for the literacy program.

"I really wanted to become a teacher for the sake of the children so they would be strong in knowing their culture, country, totems and they'd also be able to read and write in their language," she said.

PHOTO: Wadeye traditional owner Pirrimngiparl Perdjert thanks Sister Tess for her work in his welcome to country.(ABC News: Avani Dias)

Murinh-Patha one of the few thriving Aboriginal languages

Arriving by boat in 1935, at the invitation of the Australian Government, the Roman Catholics started the Thamarrurr region mission.

Seven language groups from 20 different clans were moved from the original settlement sites to the township now known as Wadeye.

The area is Yek Diminin land and the traditional owners speak Murinh-Patha. 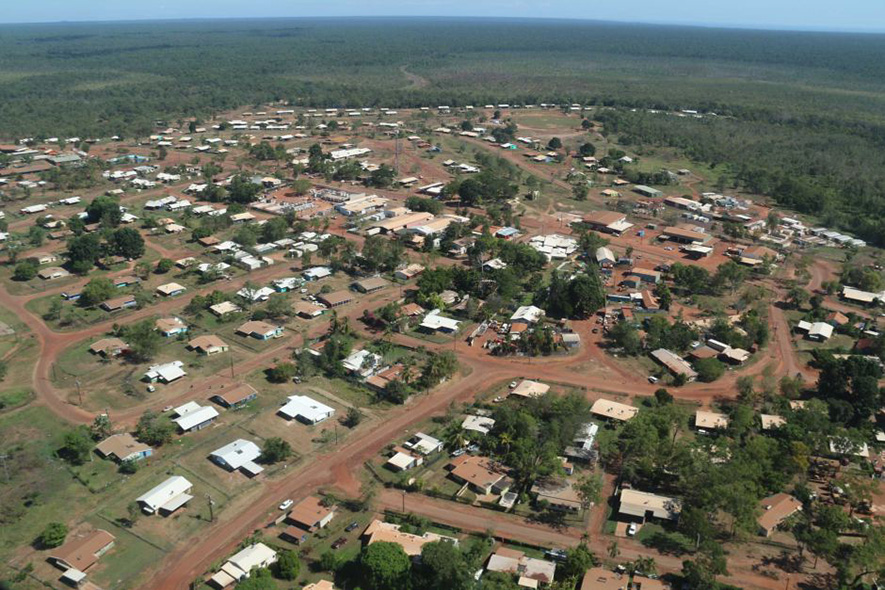 Linguist Dr Lysbeth Ford said that for this reason Murinh-Patha was chosen for bilingual education.

But as Murinh-Patha thrives, other languages from the region are dying and experts said four of the original Wadeye dialects are expected to be lost by 2020.

"All those people taught me and they're all dead, and all their children speak Murinh-patha as their main language," Dr Ford said.

Of the 250 or so Indigenous languages in Australia, the majority are now completely lost or highly endangered.

Less than 20 of the remaining languages are considered strong and Murinh-patha is one of them.

Experts said a national approach is urgently needed to preserve what remains and all Australian children should be taught an Aboriginal language at school.