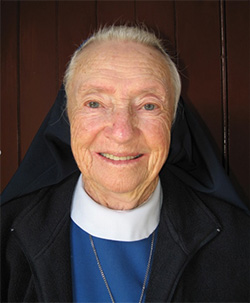 And so I prayed, and understanding was given me;
I entreated and the spirit of wisdom came to me. …
In her company all good things came to me,
and at her hands incalculable wealth. …
What I learned diligently, I shall pass on liberally,
I shall not conceal how rich she is. …
For she is to human beings an inexhaustible treasure,
and those who acquire this, win God’s friendship. …
(Wisdom, 7, 7-14)

These words taken from the Book of Wisdom, help to portray for us a pen picture of Sr M. Benedicta, who peacefully left this earthly life last Saturday and who, throughout her seventy four years as a Daughter of Our Lady of the Sacred Heart, was a woman of wisdom; a woman filled with a deep love for her God and his people, who gave of herself, without counting the cost, as she went quietly about her ministry of caring for those in need and training others, so that they too, could offer this same care.

Mary Johanna Carroll was born at Deepwater, in the Armidale Region of NSW, the third of the five children, and the only daughter of Matthew and Margaret Carroll. No doubt her parents and four brothers were there to welcome their special daughter and sister, as she entered her heavenly home. To her cousins and their families, with us today and to her niece, Eileen and other family members, who are unable to be with us, we offer our sympathy and prayers as you grieve the death of your much loved aunt, cousin and friend, who also loved you dearly.

Mary, or Mollie as she was fondly known, grew up in a loving Catholic Family, who lived in her Father’s family owned hotel in Guyra, until they moved on to the land. The death of her eldest brother, Norman, at the age of seventeen had a profound impact on Mollie, who was only ten at the time. Apart from this sadness Mollie writes of having: happy family memories, with the spoilt only girl syndrome, receiving lots of love and having a lot of power. My father was a quiet man. My mother was a strong woman, an adorable Mother and companion, strongly protective, having plenty of common sense, whom I tried to imitate because she was much loved by everyone. Mollie continues: I was allowed to grow-up in a special way, even though protected. I had a feeling of being able to do what I wanted to do. I lived through the depression times. Our city cousins came to spend the holidays with us. We had plenty of milk, butter and meat. We also had many callers, looking for work. They were always given a meal and food. Here I learnt to share and care.

The Ursuline Sisters provided Mollie’s primary and secondary education in Guyra and Armidale. Mollie wrote: I wanted to be a nurse but I was advised that I needed to wait until I was eighteen, so a position was found for me in the office at the Lewisham Hospital which was conducted by the Sisters of the Little Company of Mary. I was so lonely being away from home. Then one day, I picked up a copy of the Annals of Our Lady of the Sacred Heart and saw a photo of a Missionary who had drowned at Thursday Island. ‘Why not take her place’, I thought. I wrote to Kensington and soon had my first interview with Mother Concepta and on the spot, I made arrangements to become an OLSH Sister. Mother Concepta suggested that I let my parents know. I spoke to my mother and she said, ‘you can’t do that, what will your father say?’ But when I spoke to him, he said, ‘What did your mother say’. They were not very enthusiastic. After a time, however, they agreed. A few weeks later my mother and I again visited Kensington and met Mother Concepta. My mother told her that I wouldn’t be much use as she hadn’t had time to teach me a lot of things. Mother Concepta assured her, ‘Don’t worry, we will teach her’, and teach me they did!

After completing her initial formation in religious life at the Novitiate of the Daughters of Our Lady of the Sacred Heart at Bowral, NSW, Mollie, or Sr M. Benedicta as she was to be known, was professed on January 6th, 1942 and came to Kensington. In 1943 she began her General Nursing Training at St Vincent’s Hospital Sydney; travelling daily from Kensington to St Vincent’s over the next four years. In 1947 Sr Benedicta’s mission dream was realized when she was appointed to the Leprosarium on Channel Island in the Northern Territory. Here she remained for two years, before returning to Sydney to undertake her Midwifery training at St Margaret’s.

In 1950 Sr Ben, as she was fondly called, returned to Channel Island for two months, before being appointed to the isolated and very poor Indigenous community of Port Keats. For the next four years she was the Sister-in Charge of the hospital and convent. During this time, she managed to establish a well organized health service, involving a number of young women from the local community. Even though they had little or no schooling, Sr Ben managed to train them to be dedicated Health Workers. From Port Keats, Sr Ben returned to Channel Island, where she helped prepare for the transfer of the 180 patients and staff, from the rocky, barren island, with a scanty, uncertain water supply, to a new site at East Arm, in bushland and only twenty kilometres from Darwin. Sr Ben was one of the founding members of the East Arm Leprosarium. Here too, there were major problems, but with the Sisters and staff working in close collaboration with the Commonwealth Health Department, and with the combination of loving care and respect, new drugs, an atmosphere of contentment and the desire to be cured, remarkable results were being realized. In 1958, Sr Ben’s dedication and the dedication of the Sisters who had gone before her, were acknowledged, when Sister was invested with the Insignia of the Order of a Member of the British Empire. (MBE). Over the next four years Sister continued in the nursing ministry, spending three years at Daly River and one year on Bathurst Island. As she did in the other N.T. Indigenous Missions, Sr Ben continued caring for the sick, assisting at the births of many babies and ensuring that the Indigenous Health Workers and nurses were given a solid foundation in all aspects of health care.

1963, saw the beginning of a new chapter in the life of Sr Benedicta, when she was asked to go to the mission in Papua New Guinea. For the next forty years Sr Ben was always the loving, caring, healing presence for those in need of the gifts with which she had been blessed and which she used so selflessly and tirelessly for all people, no matter what their culture, creed, age or need appeared to be. For someone whose Mother had apologised for the fact that she hadn’t had time to teach her seventeen old daughter a lot of things, Sr Ben managed to accomplish so much throughout her missionary life in Eastern Papua. Not only was she a much loved and highly respected, ‘no nonsense’, nurse and administrator, she was also an excellent cook, and a seamstress who could create a garment, from scraps of material, that would be suitable for any occasion. While Sr Ben appeared, to an outsider, to be frail and fragile, she possessed hidden stamina, and a will of iron, that could conquer the mountains, the thick undergrowth, and the heaving seas, if there was someone who needed her care. Coupled with this strength and endurance, was a soft, loving heart, that would see her do anything for those who called on her at any time of the day or night. Being in isolated places where medical equipment was scarce, Sr Ben learnt to improvise and was ready to try her hand at anything, if it meant a life could be saved.

Sr Benedicta summarised, in dot points, her ministries over those forty years in PNG. These included: ‘hands on nursing’; matron of area hospitals; the local training, to the level needed for accreditation, of young women; the innovative training programme for male health workers and nurses – a first in PNG; the establishment of new Clinics and Health Care programmes on the islands and other isolated areas; conducting mobile clinics in the isolated areas; caring for sick missionaries - an important apostolate; Catholic Secretary of Health and Tutor Sister for the entire Milne Bay Province; the establishment of Family Planning and Aids awareness clinics; Community Leader of the Sisters and home maker. In all aspects of Health Care, Sister Ben was held in high esteem by senior Government officials, who came to realize that this softly spoken religious sister was deserving of great respect, and did not easily give up on matters that she deemed to be important for the welfare of the people entrusted to her care.

In 2004, Sr Ben made the decision that her time in PNG must come to an end and she returned to the Australian Province, where she was to spend the next ten years as a much loved member of the Holy Family Community at Kensington, before moving to St Josephs, where, last Saturday, she gently uttered her final ‘Yes’, as God called her to Himself. May you now rest in peace dear Sr Ben after your long life of loving commitment as a Daughter of Our Lady of the Sacred Heart.