Prayer and Awareness against Human Trafficking 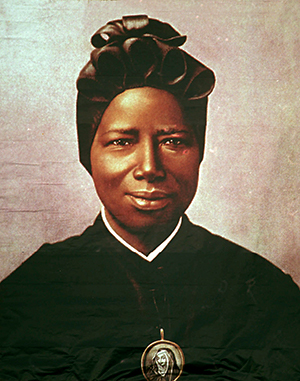 The international Day of Prayer and Awareness against Human Trafficking will be celebrated all over the world on 8 February 2016, the Feast Day of Josephine Bakhita, a Sudanese slave, freed, who became a Canossian nun, and was declared a Saint in 2000. The initiative is promoted by the Pontifical Council of Pastoral Care of Migrants and Itinerant People, the Pontifical Council for Justice and Peace and the International Union of Superiors General .

Each year, around 2.5 million people are victims of trafficking and slavery. On the other hand, for traffickers, this is one of the most lucrative illegal activities in the world, generating a total of 32 billion dollars a year. It is the third most profitable “business” after drugs and arms trafficking.

In 2014 our General chapter recommended:

“ that we look with fresh eyes at the needs of the people around us and with compassion and tenderness, reach out and heal the most vulnerable in our midst’.

To help us join with our brothers and sisters around the world to stop Human Trafficking I have included a novena and prayer to St Bakhita to end human trafficking. I have also included a list of slavery free chocolate available for Easter this year.

pdf The Good Egg Guide for a #traffikfree Easter (3.67 MB)

With a wish for God’s peace,

For more information go to http://www.acrath.org.au
ACRATH stands for the Australian Catholic Religious Against Trafficking in Humans. This group is endorsed by ACR.