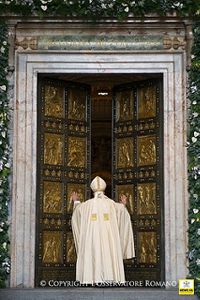 2015-12-08 Vatican Radio - (Vatican Radio) - Pope Francis on Tuesday opened the Holy Door in St. Peter’s Basilica, inaugurating the Jubilee of Mercy. The ceremony took place after he celebrated Mass for the Solemnity of the Immaculate Conception in St. Peter’s Square. The rain did not keep the people away: Over 50 thousand arrived, including the President and Prime Minister of Italy, Sergio Mattarella and Matteo Renzi; as well as King Albert II of Belgium with Queen Paola.

Pope Francis, during his homily, highlighted the primacy of grace.

“Were sin the only thing that mattered, we would be the most desperate of creatures,” Pope Francis said. “But the promised triumph of Christ’s love enfolds everything in the Father’s mercy… The Immaculate Virgin stands before us as a privileged witness of this promise and its fulfilment.”

The Holy Father went on to say the Holy Year is “itself a gift of grace.”

“To pass through the Holy Door means to rediscover the infinite mercy of the Father who welcomes everyone and goes out personally to encounter each of them,” he continued.

Pope Francis concluded his homily by saying “as we pass through the Holy Door, we also want to remember another door, which fifty years ago the Fathers of the Second Vatican Council opened to the world.”

Pope Francis said the anniversary cannot be remembered only for the legacy of the Council’s documents, but must also remember the “encounter” which happened at the Council.

“The Jubilee challenges us to this openness, and demands that we not neglect the spirit which emerged from Vatican II, the spirit of the Samaritan, as Blessed Paul VI expressed it at the conclusion of the Council” – he said – “May our passing through the Holy Door today commit us to making our own the mercy of the Good Samaritan.”

After Mass, Pope Francis opened the Holy Door to St. Peter’s, where he was met by his predecessor, Pope-emeritus Benedict XVI, whom he embraced.

The Jubilee will continue this Sunday, when Pope Francis opens the Holy Door in his Cathedral, St. John Lateran, and bishops around the world open Holy Doors in their own Cathedrals, and other designated Churches.

ANGELUS: 'MERCY' IS THE KEY-WORD OF THE GOSPEL

2015-12-08 Vatican Radio - (Vatican Radio) - Following the Mass for the Immaculate Conception, and the solemn inauguration of the Jubilee of Mercy with opening of the Holy Door at St. Peter’s Basilica, Pope Francis led the crowds in the recitation of the midday prayer to the Blessed Virgin, the Angelus.

Two things are necessary to fully celebrate the day’s feast, the Pope said: first, “to fully welcome God and His merciful grace into our life; second, to become in our own times ‘workers of mercy’ through an evangelical journey.” In imitation of Mary, he said, “we are called to be ‘bearers of Christ’ and witnesses of His love,” especially towards those who are most in need.

The Solemnity of the Immaculate Conception, the Pope said, “has a specific message to communicate to us: it reminds us that in our lives, everything is a gift, everything is mercy.” Mary helps us to rediscover “divine mercy as the distinctive mark of the Christian . . . You cannot conceive of a true Christian who is not merciful, just as you cannot conceive of God without His mercy.” Mercy, he said, “is the key-word of the Gospel.” For that reason, “we should not be afraid: we should allow ourselves to be embraced by the mercy of God, who waits for us and forgives everything.”

Following the Angelus, Pope Francis called on the crowd to greet Benedict XVI, the pope emeritus, who was present for the Liturgy and who was one of the first pilgrims to pass through the Holy Door.