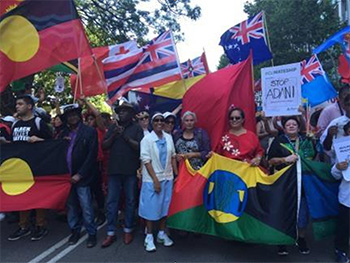 Over the weekend 800,000 Catholics joined the Global Climate March to send Pope Francis’ Laudato Si message to the world leaders in the Paris Climate Summit.

Locally, on Sunday 29th November, a group of OLSH sisters from the Provinces of Australia, Kiribati and Papua New Guinea joined with over 50,000 people and marched from the Sydney Domain to the Opera House in solidarity with millions of people around our Globe who were marching in the world’s first ever Global Climate March.

Prior to the march we gathered in the Domain and joined in singing rousing songs of change and freedom. We were addressed by Professor Tim Flannery former Australian of the Year and environmentalist.

Dr Flannery said ‘we are at the last moment we have to address climate change in a really serious way’. 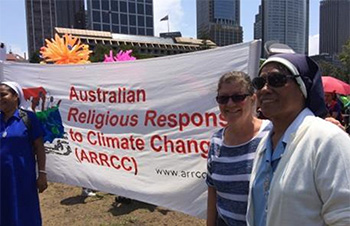 There was a sense of solidarity and respect amongst the large crowd; a deep reverence washed us when we were invited to observe a minute silence for all our brothers and sisters around the world who are currently experiencing the impact of climate change. My thoughts and prayers went out to our Sisters in Kiribati, some of whom were standing beside me. The silence was tangible and was only broken by the singing of birds.

We then proceeded to march along Macquarie Street and although we were in our thousands we sang with one voice and the messages so aptly summed up in posters and banners were clear.

Let us take to heart the following words of Pope Francis:

Here, I would echo that courageous challenge: “As never before in history, common destiny beckons us to seek a new beginning…

Let ours be a time remembered for the awakening of a new reverence for life, the firm resolve to achieve sustainability, the quickening of the struggle for justice and peace, and the joyful celebration of life”.