The low-lying South Pacific island nation of Kiribati has an average height of 2 metres above sea level, making it one of the countries most vulnerable to rising waters and other climate change effects.

The impact of climate change is already taking its toll on over 105,000 people living on the low-lying atolls of Kiribati. These lands are threatened by rising sea levels resulting in flooding becoming more common, seawater contaminating fresh water wells and sea water seeping into some garden areas and destroying crops.

Pacific Calling Partnership, a group that Sr Philippa Murphy and Sr Lorraine McCleary belong to, organised a conference in Sydney this week. The theme of the conference was; Climate Change and our Common Home in the Pacific’. Over 100 people attended the conference and a group of OLSH sisters, (Srs Kaitaake, Maria and Bina from Kiribati Province and Srs Lorraine and Philippa from the Australian Province) gave one of the key presentations on our Congregation’s response to Care of the Earth; based on our 19th General Chapter Statements and Recommendations, with a particular emphasis on Heart Spirituality and the impact of Climate Change on the lives of the people of Kiribati.

The Sisters from Kiribati showed great courage as they shared their personal stories on how Climate Change is impacting on their people and the country Kiribati. The Sister’s sharing of their real life experience of fleeing King Tides, rising sea levels and suffering the pain of their own people whose houses are being destroyed and their gardens decimated was very moving.

Their plea that all of us do something about Climate Change now so that their people can have hope of being able to continue to live on their own land in their own country touched all of those present at the conference. 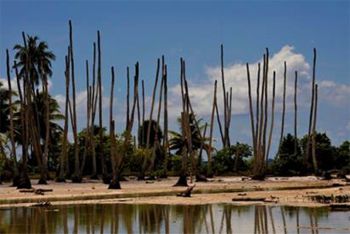 ‘Climate change is having a grave impact on the people of Kiribati, taro is one of our staple foods but there is a problem growing it because of salty water in our gardens and the coconut tree cannot grow in this salty land. Fish in the sea have to move to find another place for their shelter. They are all affected by climate change and rising sea levels.’

A very solid scientific consensus indicates that we are presently witnessing a disturbing warming of the climatic system. In recent decades this warming has been accompanied by a constant rise in the sea level. Pope Francis “Laudato  si” 23 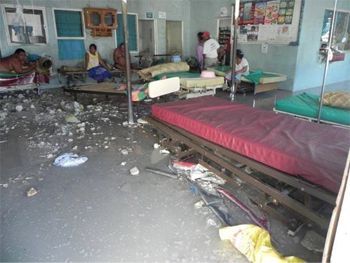 ‘The most terrible experience I have had in my life was when a huge wave bashed the hospital in Betio due to the rising tide. Betio is a small island which is part of Tarawa in the Republic of Kiribati.

Early this year I went to visit the hospital in Betio to see my Sisters who had been admitted three days before.

While we were chatting we heard a frightening sound like a loud whistle blowing through the  building.  The  cement  brick  walls  began  to  shake and soon the waters flooded in. We were soon soaking wet, and I was shocked to see my sisters lying on the floor with other patients as if paralysed by fright. The patients were screaming as the power went out. We were scared and the nurses tried to help us by moving the patients to other areas and some men came with a truck to take them to the sport complex where there is a big building.

Kiribati needs your help. Please help our country from the rising sea level which may cause our land to disappear within 50 years. Please help our women to gain an education to be the voice of the Kiribati people.’

Sr Bina shares about her experiences of the King tides:

It was scary – people along the coast screamed and were shocked. They busied themselves trying to gather their scattered belongings that were floating away. People wondered and talked, saying; “Is this the end of us? We are not safe anymore. Does anybody think about our problem at this time?” 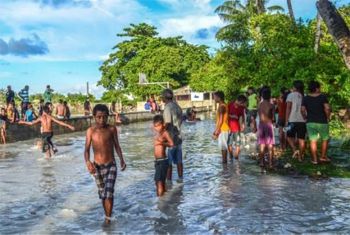 This experience and many others raised a big question in  us. What is happening that our beautiful island is not safe anymore? The climate change has affected our lands and is destroying it. It is time to wake up and educate the young ones especially our young Sisters to be a strong voice for  our Kiribati people. To tell other countries that what they are doing to make life easier with fossil fuel use,  could result in our country disappearing.’