'I have had a wonderful life' ...Happy 100th Birthday Sr Constance Daley 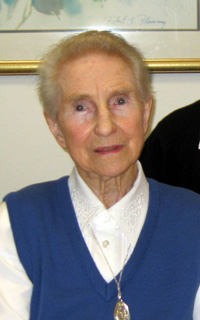 Why “Daley’ with an ‘e’? With a wry smile, Sister Constance quipped ‘we’re the aristocratic clan from the Highlands of Scotland’. Well, she added, ‘that was what my mother said’. With remarkable clarity she can remember her childhood and delighted in recalling when she was five years old she nearly drowned in a water hole on their farm only to be scolded by her mother for being sopping wet. But when it came to football, the family were at one. Born in Essendon on 21 May 1915, the family – mother, father, a sister, and three brothers were all Bomber supporters.

It was not until she was 34 years old that she became a nun, taking the name of Constance, the same as a Sister of Charity friend where they both had worked at St Vincent’s Hospital in Melbourne. Her path to becoming a nun was not straightforward. ‘At various stages I was discouraged and then I had to convince the Lord I had this vocation’ she said. When she had decided, she went to confession and the priest asked her if she had ever thought of entering the convent. She was able to tell him right then that she had decided. That was in November 1949.

In 1952 she was sent to the Leprosarium on the Channel Island in Darwin Harbour – ‘a sad place with terrible conditions’. Two years later she was transferred to Sydney to assist with the establishment of Our Lady of the Sacred Heart Hospital in Randwick. Her friend Sister Eileen Van der Lee was also a foundation sister of the hospital and ‘we still meet for a regular ‘pow-pow’.

1964 saw a change when she moved to the boarding school at Toowoomba, then when she was 50 years old she was transferred to look after the Boys Infirmary at the OLSH College in Bowral. It is hard to believe but the doctor there remarked to one of the other sisters that he never argued with Sr Constance. ‘She is always right!’

For the next few years she held various appointments and also spent time with her ailing mother. It was also the era of Vatican II. ‘There was a certainty about many things Pre-Vatican II’ said Sr Constance ‘but post Vatican II brought in some desirable changes’.

A major change occurred in 1974. An advertisement in the Women’s Weekly offered lessons in Porcelain Painting. She always had a flair for painting and enrolled in the classes, learning all the techniques of painting with oils, watercolours and china painting and began producing various pieces. She sold some of her works and with the money bought her own kiln.

Sr Constance was then able to broaden her painting, using vases, plates, cups and saucers. A large plate of a stag head with mountains in the background was exhibited in the Art Gallery and she had some successes at the Royal Melbourne Show.

Porcelain Painting requires lots of patience and there are always a few mishaps. ‘Fortunately I lost only a few pieces’ she said. Not lost though is her notebooks of her business records from 1978 to 1994. By then her enthusiasm began to wane and she decided to sell all her works- books, paints, oils, all sorts of stuff. Sadly there are few pieces to see but her compendium is full of photos of her work.

Orders of nuns carry out various apostolates – nursing and teaching for example. Sr Constance has added another, perhaps an unusual one - creating things of beauty for others to enjoy. It was, for her, a mission of witness to God and for others who might otherwise not have contact with a member of a religious order.

In 2014 Sister Constance celebrated her 70 year Jubilee as a Daughter of Our Lady of the Sacred Heart. In May she reaches her centenary. ‘I have had a wonderful life’ she says and her retirement is spent at St Joseph’s Aged Care in Kensington.