The Stations of the cross with John Paul II 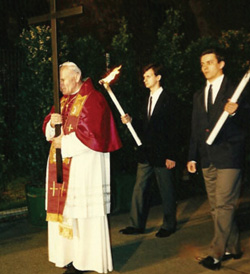 On the path of ecological conversion

These Stations of the Cross were prepared especially for those who have a deep admiration and love for Blessed John Paul II. If you are one of those people, and if you want to continue to be inspired and challenged by his prophetic message, these Stations of the Cross are meant in a special way for you and your faith community. Throughout his pontificate, in his preaching and teaching, Bl. John Paul II consistently emphasized the gravity of the environmental crisis and the urgent need for the Church to respond to its moral and spiritual dimensions. He said that “we must encourage and support ‘the ecological conversion,’ which has made humanity more sensitive to the catastrophe to which it has been heading.” For the late Holy Father, “the penitential season of Lent offers a profound lesson to respect the environment.” It is in this spirit that we present to you these Stations of the Cross with John Paul II.

Pope Francis’ universal prayer intention for April 2015 is “That people may learn to respect creation and care for it as a gift of God”.